Obama ticked off the year's improvements, citing lower unemployment, a rising number of Americans covered by health insurance and a historic diplomatic opening with Cuba, as well as his executive action on climate change. 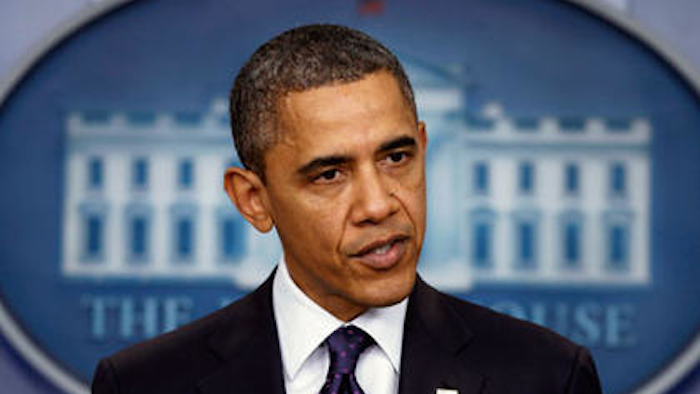 President Barack Obama said Friday that 2014 has been "a breakthrough year for America," putting aside the fits and starts of the past 12 months to focus on achievements and the prospect of compromise with his political foes who are taking control of Congress.

The news conference came at the end of what Obama titled his "Year of Action," one in which Congress failed to take up most of his agenda and he turned to looking for ways to act on his own. Republicans cried foul at that tactic, accusing Obama of overstepping his authority, and voters didn't seem to think much of the strategy, either, giving the president low marks in public opinion polls.

On Friday, the president acknowledged many unanticipated crises in the past year but said he enters 2015 with renewed confidence that "America is making strides where it counts." He said he intends to make sure the economy, government and justice system work for everyone.

"I am energized," Obama declared, trying to shake off last month's midterm elections that brought crushing losses for his party.

He ticked off the year's improvements, citing lower unemployment, a rising number of Americans covered by health insurance and a historic diplomatic opening with Cuba. He declined to describe what type of modifications he'd like to see in the communist nation, noting he doesn't anticipate overnight changes.

"This is still a regime that oppresses its people," Obama said. But he also said he was hopeful a new approach would bring progress.

On climate change, the touted his own executive action and a Chinese agreement to combat global warming. He also noted that on Friday the Treasury Department announced it had sold the last investment related to the Wall Street and auto bailouts. And he said America's combat mission in Afghanistan would soon be over.

"Take any metric that you want, America's resurgence is real. We are better off."

He will return to Washington with both congressional chambers under Republican control — a first since he's been in the White House — and attention turning to the 2016 race to replace him. While much of his agenda will face a dead end on Capitol Hill, Obama aides say he'll look for areas of compromise on issues like trade and taxes and continue to act on his own where he can.

"I'm being sincere when I say I want to work with this new Congress to get things done," Obama said.

Obama said he has been speaking to House Speaker John Boehner and incoming Senate Majority Leader Mitch McConnell about how they can make progress.

"They are serious about wanting to get things done. The tax area is one area where we can get things done," Obama said. He said he wanted to see more fairness and simplicity, but he cautioned, "The devil's in the details."

He said he also wants to see upgrades to the America's deteriorating roadways along with tax reform.

Obama faces continued violent upheaval overseas next year, particularly in the Middle East. The U.S. is maintaining troops in Iraq and Afghanistan to help local forces deal with terrorist threats in both countries, while continuing airstrikes against Islamic State militants in Syria and Iraq. And Russia continues its assertive actions in Ukraine, leading Obama to impose economic sanctions.