Obama Calls for Additional Regulation, Investment in State of the Union Address 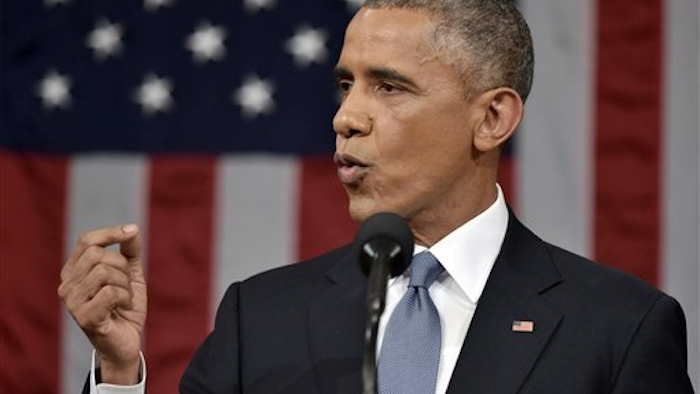 That included a call for legislation enabling workers to earn seven days of paid sick leave, with the president saying the lack of a national sick leave and maternity leave requirement separates the U.S. from every other "advanced country."

The president foreshadowed his forthcoming budget plan, which he said would lower taxes for "working families" while closing loopholes that he said benefit "companies that keep profits abroad" and allow "the top one percent to avoid paying taxes on their accumulated wealth."

Obama said further savings from the tax overhaul in his budget should go toward investments in education and infrastructure. He proposed a new annual tax credit of $3,000 per child for childcare, calling the need for quality childcare for families where both parents work a "national economic priority." And he highlighted plans outlined earlier this month to make community colleges tuition-free — provided students go on to receive a four-year degree.

The president also called on members of both parties to join together in improving ports, bridges, rail and other structural needs, calling on lawmakers to "set our sights higher than a single oil pipeline" — a reference to the proposed Keystone XL project that would send crude oil from Canada to the Gulf Coast, and has become a symbol for the divide between business and environmental interests.

On the foreign policy front, Obama called for authority to establish trade agreements in Asia and Europe amid controversy over the proposed Trans-Pacific Partnership, and called for Congress to work to end the five-decade trade embargo with Cuba after his administration relaxed a number of standards relating to that nation this month.

He also vowed to "protect a free and open Internet" — backing "net neutrality" guidelines opposed by some large telecom companies — and called for bolstering the nation's response to potential cyber threats after a year full of noteworthy attacks.

In the wake of a report calling 2014 the hottest year on record, the president lauded a recent agreement with China on curbing carbon emissions, telling lawmakers, "The Pentagon says that climate change poses immediate risks to our national security; we should act like it."

Many of the proposed initiatives likely face long odds to make it through Congress, where Republicans now control both the House and Senate. Obama, for his part, also issued a series of preemptive veto threats on issues ranging from health insurance to Wall Street regulations to immigration.

The official GOP response to the address, however, focused partially on two areas where Republicans agreed with the president: reducing international trade barriers and simplifying the nation's tax code.

"The president has already expressed some support for these kinds of ideas," said newly-elected Sen. Joni Ernst, R-Iowa. "We're calling on him now to cooperate to pass them."

Ernst also said Obama will "soon have a decision to make" on the Keystone pipeline, arguing his own administration projects thousands of jobs and billions in economic activity could follow.

"We heard the message you sent in November, loud and clear," Ernst said. "And now we're getting to work to change the direction Washington has been taking our country."