Takata Corp., the Japanese maker of air bags at the center of massive recalls in the U.S. and elsewhere, said Wednesday that it was reshuffling its top executives, who plan to take pay cuts in response to the crisis. 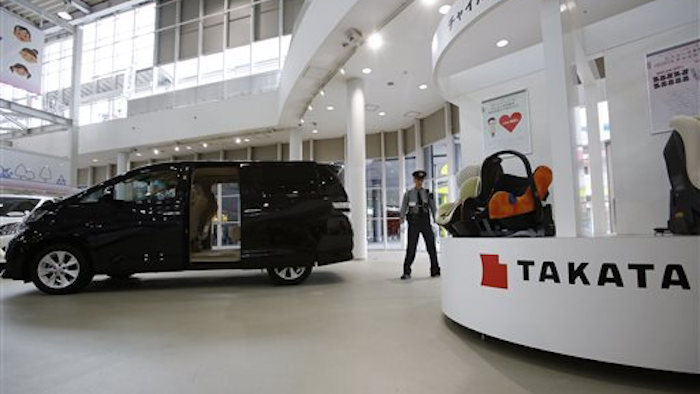 Tokyo, Japan — Takata Corp., the Japanese maker of air bags at the center of massive recalls in the U.S. and elsewhere, said Wednesday that it was reshuffling its top executives, who plan to take pay cuts in response to the crisis.

Takata's president Stefan Stocker is moving aside to let its chairman, Shigehisa Takada, take over, the company said in a statement. Stocker is remaining on Takata's board, said company spokeswoman Akiko Watanabe.

The inflators in the air bags can explode with too much force, spewing shrapnel at drivers and passengers. At least 10 automakers have models equipped with Takata driver and passenger air bags, and tens of millions of vehicles may eventually be recalled. At least five deaths have been blamed on Takata inflators, four in the U.S.

U.S. regulators have demanded that Takata recall all driver's side air bags in vehicles across the U.S. Takata has resisted, saying the problem only occurs in areas such as Florida and Hawaii with consistently high humidity. However, five automakers that equip their cars and trucks with the air bags have agreed to the nationwide recall. Takata is in the process of increasing production to make enough replacement parts.

Still undecided is whether Takata or the automakers will pay the extra costs involved.

Takata also reiterated an apology Wednesday to those affected by the faulty air bags, saying it "takes seriously" the trouble it caused to many customers and their family members.

Watanabe said the reorganization is meant "to centralize and speed up the decision-making process, and to step up handling" of the problem.

Takada, Stocker and three other top executives of the company will take pay cuts ranging from 20 percent to 50 percent, for four months. The pay cuts are in response to the company's huge losses and cancellation of dividend payments, Takata said.

The company previously announced losses of more than $400 million related to the air bag recalls.