The 2016 Titan has a new Cummins diesel engine that Nissan says will give the truck the power and capability of a heavy-duty truck at the price of a light-duty one. Ford and GM don't offer diesels on their light-duty trucks. Chrysler's Ram does, but Nissan's Cummins V8 diesel is more powerful than Ram's V6, and can tow more. 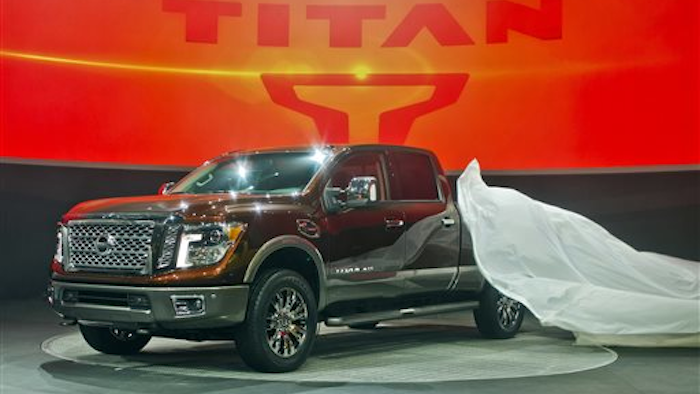 Detroit, Michigan — Over the last two years, all three of the nation's best-selling full-size pickups — the Ford F-150, Chevrolet Silverado and Ram 1500 — have gotten big redesigns. Now it's the Nissan Titan's turn.

The Titan is a tiny player in this space. Last year, Nissan sold 12,527 Titans in the U.S.SENT By comparison, Ford sold 14,497 F-Series trucks every week. Truck buyers are extremely loyal to their brands, and the Titan — introduced a decade ago — has had a hard time breaking the Big Three's dominance.

Nissan CEO Carlos Ghosn says the company is hoping for a 5 percent market share with the updated truck, compared with a current 1 percent.

The 2016 Titan has a new Cummins diesel engine that Nissan says will give the truck the power and capability of a heavy-duty truck at the price of a light-duty one. Ford and GM don't offer diesels on their light-duty trucks. Chrysler's Ram does, but Nissan's Cummins V8 diesel is more powerful than Ram's V6, and can tow more.

Nissan introduced the 2016 Titan XD Monday at the Detroit auto show. It goes on sale late this year.

INSIDE: Nissan says the new Titan has more front and rear storage in the cabin, including locking storage under the second-row seats and a center console than can hold a 15-inch laptop. New options include a bird's-eye view camera — a composite image from front, rear and side cameras — to help with towing and tight parking spots and heated and cooled front seats.

OUTSIDE: Nissan says it redesigned the truck around its new, larger diesel engine, and the result is far more imposing than the first-generation Titan. It's also more aerodynamic, with front, roof and tailgate spoilers to improve air flow. Options include LED headlights and taillights and puddle lamps.

UNDER THE HOOD: The Titan Crew Cab will have three powertrain options. The first to be revealed is the 5.0-liter turbocharged V8 made for Nissan by Indiana-based Cummins Inc. The engine gets 310 horsepower and 555 pound-feet of torque, and can tow up to 12,000 pounds. It's mated to a 6-speed Aisin transmission. Nissan will also offer a V6 and a V8 gas engine.

PRICE: Not announced. The current Titan starts at $29,360, but the diesel model will likely command a premium.

CHEERS: Nissan is smart to stake out this niche in the market, and a capable diesel will probably win commercial and fleet buyers.

JEERS: Bad timing for a diesel pickup. Gas prices are at a five-year low, but diesel is averaging about $1 per gallon more than regular. And gas-powered rivals will still beat the diesel Titan in towing and power.