A typical craft brewery uses up to 7 gallons of water to make 1 gallon of beer. Some in California have decreased that ratio to less than 5-to-1, but they are still being asked to cut back to meet the state mandate. 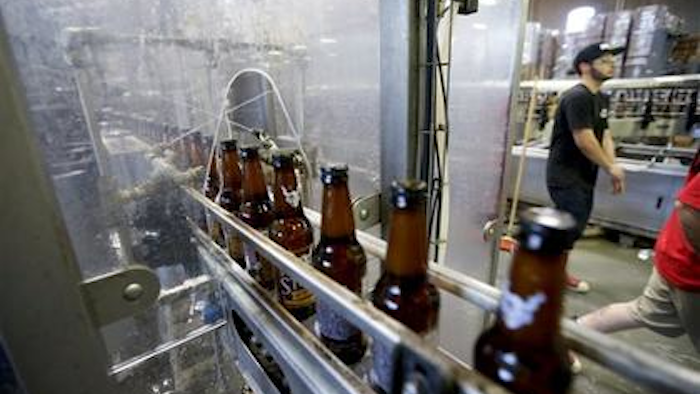 Amid severe drought, the water board in this Southern California town imposed restrictions on Fallbrook Brewing Co., just as the tiny brewer doubled capacity to meet demand for its craft beers.

To cut monthly water use by about 10 percent, owner Chuck McLaughlin bought an extra 310-gallon tank to catch water used in the brewing process to reuse it for cleaning equipment. His new brewhouse includes a chiller that uses two-thirds less water than his old one.

As a small business, there's no extra money to pay potentially thousands in fines if he exceeds the limit.

So far, "it's been very close," said McLaughlin, whose brewery is run out of a former consignment shop in Fallbrook, a town of 30,000 people about 60 miles north of San Diego.

California has more craft breweries — small, independent beer makers that use traditional ingredients — than any other state. More than 570 are in operation and another 240 are slated to open, according to the California Craft Brewers Association. Craft breweries contributed $6.5 billion to the state economy last year alone, producing 3.5 million barrels.

A typical craft brewery uses up to 7 gallons of water to make 1 gallon of beer. Some in California have decreased that ratio to less than 5-to-1, but they are still being asked to cut back to meet the state mandate, which aims for California's overall urban water use to go down by 25 percent when compared with 2013.

No other state in the drought-plagued West has taken such action.

Breweries are digging wells, installing wastewater treatment plants and seeking exemptions from local water boards that control water use and can impose fines. Some are shelving planned expansions.

If Mother Nature doesn't bring significant showers and snowstorms this fall and winter, some breweries may be forced to leave the state.

Sierra Nevada Brewing Co. and other established California breweries, such as Stone Brewing Co., recently opened plants on the East Coast. But they say the motive was not the drought but to cut transportation costs to those markets.

Still, "a lot of brewers are looking to open up new breweries and a lot of them have concerns over water availability in the state of California," said Cheri Chastain, Sierra Nevada's sustainability manager. "Drought has the potential to move a lot in the industry outside the state or prevent it from growing."

Officials in the city of Chico told Sierra Nevada this spring to drop its water use by 32 percent. The nation's largest private craft brewery already had cut its usage by 25 percent and said further cuts would hurt production. The local water board agreed to exempt the water it uses to produce beer and asked Sierra Nevada to work toward reducing water used for its restaurant and landscaping by 42 percent.

Bear Republic Brewing Co. has taken some of the most drastic measures. The company last year pulled out of 15 U.S. markets and four countries after the Northern California town of Cloverdale informed the brewery it did not have enough water to sustain it.

But instead of moving, Bear Republic spent $466,000 to dig two wells for the town of 9,000 residents. It spent an additional $4 million on its own water treatment system, which uses electrically active microbes to purify wastewater, allowing the brewery to recycle up to 25 percent of the water it uses for equipment cleaning.

"We have to make sure to protect our future, not only for the community but for our 157 employees who have a home here — just packing up and leaving would be devastating to them," owner Richard R. Norgrove Sr. said.

But he adds: "We also have to look to the outside world to see where we're going to build our long-term growth if we can't do it here."

That could mean building a second plant where there is ample water.

Stone Brewing Co. in Escondido is spending $1 million on expanding its $8 million wastewater treatment system installed in 2008 and aims to use only 3 gallons of water for every gallon of beer it produces.

"We don't have any prediction on what's coming down, and we don't want to get penalized," said Pat Tiernan, chief operating officer.

McLaughlin could find relief by moving his brewery to the neighboring city of Oceanside, whose water reduction target is 20 percent — compared with 36 percent for the town of Fallbrook. Each district's reduction target is based on how much water that district used per person in 2013.

But like many craft brewers, McLaughlin believes the local community is what makes his beers stand out.

No stranger to water woes, the town was depicted in Frank Capra's 1952 film, "The Fallbrook Story," about ranchers fighting the federal government over water rights to a nearby river.

Today it is best known for its annual avocado festival, where children outfit avocados with tiny wheels to race them in the "Avo 500." One of his brewery's most popular ales is a saison infused with local avocado-blossom honey.

"'Be social. Drink local.' That's our motto," he said. "We wouldn't consider moving outside of Fallbrook. We'll just pray for rain — maybe hire a rain dancer."