C.F. Sauer is loading its product on barges headed for places like Africa and New Zealand, and its international business is growing with the help of a unique state-run program. 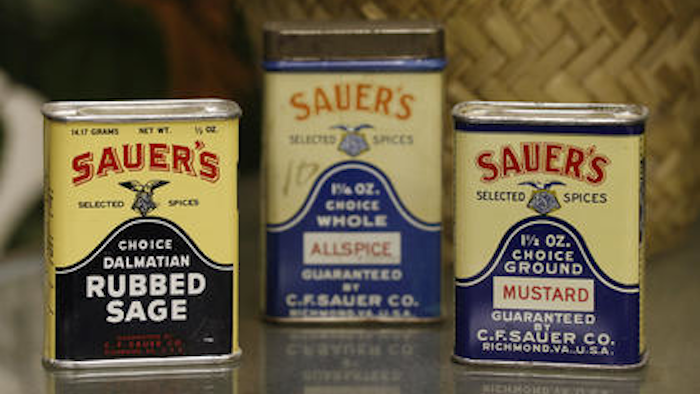 When longtime Virginia spice and condiment company C.F. Sauer first started selling its wares in 1887, its flavor extracts and seasonings were delivered in a covered wagon pulled by a donkey.

Now, the seller of Duke's mayonnaise is loading its product on barges headed for places like Africa and New Zealand. And its international business is growing with the help of a unique state-run program.

C.F. Sauer, with its trademark lighted sign featuring a chef pouring vanilla extract into a mixing bowl atop its red-bricked Richmond headquarters, is one of more than 200 companies that have participated in the Virginia Economic Development Partnership's Virginia Leaders in Export Trade program, which teaches state businesses how to export their products and services overseas through technical training, market research and trade missions.

Participating companies on average see a more than 50 percent increase in international sales during and immediately after taking part in the program, according to state economic development officials. And for C.F. Sauer, its overseas exports have grown from 10 percent to 16 percent of its overall sales in the last two years and the company expects international sales to comprise nearly 30 percent of its business in the next five years.

"The only way you're not going to be successful is if you don't want to be successful because they're going to do all the groundwork for you; you just have to sell your products," said Rob Davenport, sales manager for C.F. Sauer, the nation's second-biggest spice company and third-largest domestic mayonnaise maker. International trade is "kind of like the Wild, Wild West. There are always opportunities and there's always growth."

C.F. Sauer's first foray into international trade came on the heels of its 1996 acquisition of the Bama brand from Welch Foods Inc., whose mayonnaise is the No. 1 edible consumer packaged item imported into Africa. Bama mayonnaise is considered a status symbol with 96 percent brand recognition in countries like Nigeria and is even often given as a wedding gift, the company says.

While its entry into Africa was almost instantaneous, Davenport was tasked by the company with further growing sales. But as in many cases at businesses worldwide, he was to do it without additional resources.

With the help of the state program's help researching new markets and vetting distributors, Davenport said the company, which recently received the 2014 Governor's Award for Excellence in International Trade, was able to complete five years' worth of work in two years. Assistance through the program allows the company to "be more focused on where we should go and how we're going to be more successful when we do," he said.

C.F. Sauer's international exports to places like Africa, Mexico, South America, Australia and New Zealand, now comprise about 16 percent of its $387.5 million in annual sales. The company that makes the spice blends for Chick-fil-A also is completing expansion work in Richmond in January to better its domestic and global customers. It has about 900 employees at facilities in South Carolina, Kansas and Virginia, where passers by its Richmond plant can experience sensory overload from the smells of cinnamon and ground pepper to bourbon vanilla extract and meat tenderizer.

The state takes in about 25 companies per year and spends about $500,000 annually through the two-year program, said Paul H. Grossman Jr., vice president of international trade for the Virginia Economic Development Partnership. Notable companies that have participated in the program include hardwood flooring company Lumber Liquidators and appliance maker Hamilton Beach. The most recent class includes companies that have an average of more than 100 employees and have been in business about 20 years.

"These are companies that are solid on the U.S. market, profitable and now they're ready to go international," Grossman said.

Increasing exports, which are continuing to rebound from significant declines in 2008 and 2009 during the Great Recession, is part of Gov. Terry McAuliffe's "New Virginia Economy" strategic plan to diversify the state economy to be less dependent on federal government-related jobs. In 2013, Virginia exports of goods and services totaled $34 billion. State officials noted they've seen a transition from exporting manufactured goods to exporting services like cybersecurity and training.

According to a report by the American Economic Development Institute and Pollina Corporate Real Estate Inc., Virginia's economic development organization ranked second in the country in 2014 and noted the state's "boots on the ground" approach to helping Virginia businesses thrive. Grossman said Virginia's recent success is due in part to several state economic development programs, many that are the only ones of their kind.

"(We) can make all those connections for Virginia companies," Grossman said. "We put Virginia businesspeople in front of international customers."