U.S. factory activity grew at the slowest pace in six months in December, weakened by declines in orders and production. Yet growth was still healthy, a sign manufacturing may help drive the economy's expansion in 2015 as it did last year. 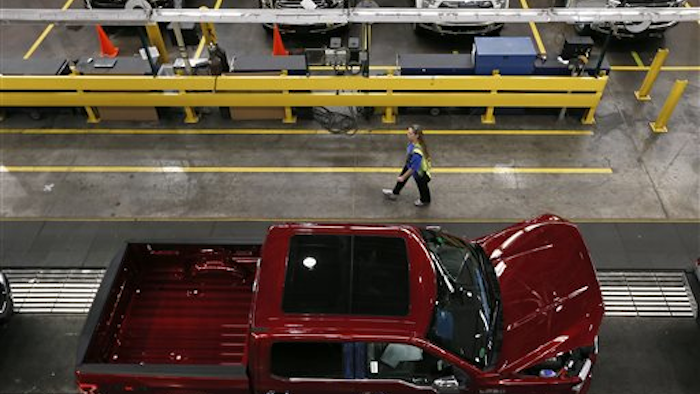 U.S. factory activity grew at the slowest pace in six months in December, weakened by declines in orders and production. Yet growth was still healthy, a sign manufacturing may help drive the economy's expansion in 2015 as it did last year.

The Institute for Supply Management, a trade group of purchasing managers, said Friday that its manufacturing index fell to 55.5 in December from 58.7 in November. Any reading above 50 signals expansion. November's figure was just below a three-year high reached in October.

December's reading is the lowest since June. But it is also close to the average for all of 2014 and remains at a solid level. Americans are buying more cars and appliances, boosting demand for factory-made goods. Economists also forecast that businesses may spend more on industrial equipment this year, which would also lift output.

A labor dispute at West Coast seaports, from San Diego to Seattle, has interrupted the shipment of raw materials for many manufacturers, the ISM survey found. That has disrupted production and likely contributed to the lower reading.

Despite the decline, most economists are optimistic about manufacturing's prospects in 2015.

"These were readings that in any ordinary time would be considered excellent," Guy Berger, an economist at RBS Securities wrote in a note to clients.

The survey's measure of employment rose to a four-month high, evidence that factories added jobs last month. That is a good sign for the December jobs report, which will be released next Friday.

U.S. manufacturers are still growing despite struggling economies overseas. A measure of overseas demand for U.S. goods fell last month, the ISM survey found, but remained in expansion territory. Most economists are confident that the U.S. market is large enough to sustain U.S. factory growth this year.

"The strength of domestic demand will ensure that industry and the wider economy still perform particularly well in 2015," Paul Dales, an economist at Capital Economics, said.

Factory activity in China contracted last month for the first time since May, according to a survey by the bank HSBC Corp. That's the latest sign that the world's second-largest economy is slowing even as its government seeks to put it on a more sustainable path.

A manufacturing index for the 18 European nations that share the euro currency rose slightly in December after falling to a 17-month low the previous month.

Falling prices for oil and other commodities have helped many manufacturers by lowering costs, the ISM found.

Other recent data on U.S. manufacturing has been modestly positive.

Meanwhile, demand for long-lasting factory goods slipped in November for the third time in four months, according to the Commerce Department.

The drop was driven mostly by lower orders for military goods. A category that economists view as a proxy for business investment spending — which excludes volatile aircraft and defense orders — was flat last month. That marks an improvement from declines of 1.9 percent in October and 1.1 percent in September.