Trade pacts create odd politics. That's why advocates hope new trade agreements might advance this year despite tensions between the Republican-run Congress and the Democratic White House on so many other issues. 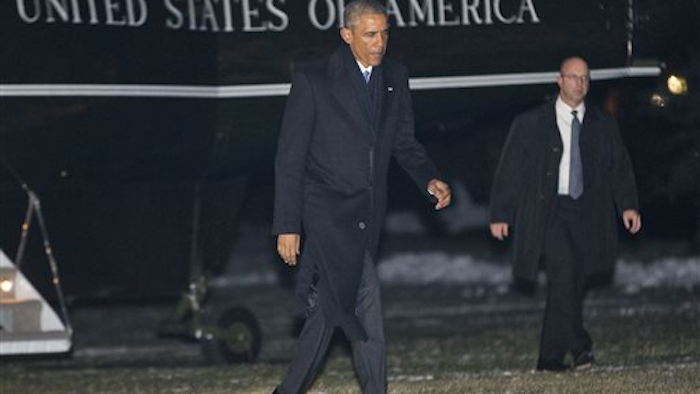 Washington — Trade pacts create odd politics. That's why advocates hope new trade agreements might advance this year despite tensions between the Republican-run Congress and the Democratic White House on so many other issues.

President Barack Obama, like presidents of both parties before him, wants renewed authority to negotiate complex, multinational trade deals that Congress can approve or reject, but not amend. This "trade promotion" or "fast track" authority is crucial to keep critics on the left and right from attaching killer amendments.

Many Republicans favor freer trade, while many liberal groups vehemently oppose it, claiming it encourages companies to send U.S. jobs overseas. These fault lines are creating new and rare sniping between Obama and countless activists who have considered him a political hero.

Dozens of these activists — along with several Democratic lawmakers — crammed a Capitol Hill news conference Thursday to condemn "fast track" authority as a freeway to U.S. job losses, environmental wrongdoings by trade partners, riskier imported foods and drugs, and many other woes.

Even "the root causes of Ferguson" — the Missouri suburb where a fatal police shooting led to national angst and protests — "lie in the shutdowns in St. Louis," which stem from deals like the 1994 North American Free Trade Agreement, said Larry Cohen, president of the Communications Workers of America.

"This is the biggest coalition on trade ever," Cohen said of the combined efforts of groups focused on the environment, food safety, organized labor, generic drugs, religious outreach, world hunger and many other causes.

One target is the long-debated Trans-Pacific Partnership deal involving the United States and 11 other nations, including Japan but not China. The liberal coalition, however, says its main goal is to thwart trade promotion authority, or TPA, for Obama and future presidents. That would make the Pacific plan and all other large U.S. trade proposals nearly impossible.

Obama acknowledges the challenge of persuading a Congress full of Republicans who intensely dislike him and Democrats whose pro-labor, pro-environment constituents don't want "another NAFTA."

"Some of those same anti-trade impulses are more ascendant in the Republican Party than they might have been 20 years ago," the president told the pro-trade Business Roundtable last month.

And many Democrats, he said, "have legitimate complaints about some of the trend lines of inequality, but are barking up the wrong tree" by primarily blaming trade deals for flat wages and lost manufacturing jobs.

Republican Rep. Pat Tiberi of Ohio, who chairs the Ways and Means subcommittee that handles trade, echoes Obama's point. Big advances in world technology, "not some person in some village in Mexico," have eliminated huge numbers of U.S. manufacturing jobs, he said in an interview Thursday.

"Ninety-six percent of the people around the world who are buying things are outside the United States. And we need to have access to those people," he said.

Some Republican lawmakers say they're so angry at Obama, especially for acting unilaterally on issues like immigration, that they don't want to give him a victory on trade. Tiberi says that's short-sighted.

"I'm very unhappy with the president," he said, "but I think the greater good here is jobs." And liberals, he said, "should trust Barack Obama more than any other president."

Some Democrats indeed seem conflicted about battling Obama over trade. Newly elected Democratic Rep. Debbie Dingell, whose Michigan district has seen big losses in auto-making jobs, attended Thursday's news conference and demanded that U.S. negotiators crack down on foreign countries that keep their currency artificially low. The tactic makes the country's products more affordable to other nations, and "currency is the mother of all trade barriers," she said.

But Dingell declined to say whether she pressed Obama on the matter when they traveled together Wednesday to a Michigan car plant, where Obama did not discuss trade. Dingell noted that the president played a crucial role in helping the auto industry recover from the 2008 recession.

In the Senate, former U.S. Trade Representative Rob Portman — now a Republican senator from Ohio — is urging the two parties to agree on details for a trade promotion authority bill. "This is one area where the president and most Republicans can find common ground: helping American workers, farmers and service providers" achieve better jobs, Portman said in an interview.

Presidents have enjoyed fast track authority off and on for the past 40 years. Obama began seeking renewal of the powers in 2012.

AFL-CIO President Richard Trumka, one of 22 speakers at Thursday's liberal gathering, said trade deals "should be open to the American public and should benefit everybody, not just Wall Street."

In an interview, Trumka said he thinks Congress will reject Obama's negotiating request "because the vast majority of Americans — Democrats, Republicans and independents — disagree with it and know it's bad."

Tiberi, however, said he thinks the combined efforts of the White House, business interests and Republican leaders will restore the enhanced negotiating powers.