The global economy, slowed by stagnation in Europe and Japan, is being further hampered by China's decelerating growth. 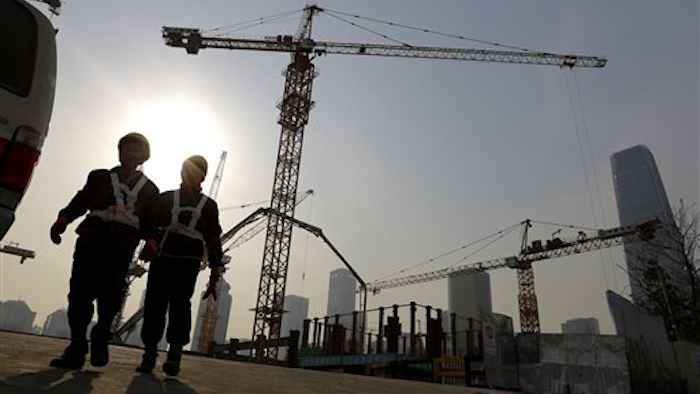 Hong Kong — The global economy, slowed by stagnation in Europe and Japan, is being further hampered by China's decelerating growth.

The Chinese economy grew 7.4 percent in 2014, its weakest performance in nearly a quarter-century. And its growth is forecast to slow even more over the next two years.

The figures released Tuesday remain, by just about any measure, impressive. China continues to grow at more than twice the pace of the overall world and about three times as fast as the U.S. economy. Yet its growth rate marks a sharp drop from China's sizzling double-digit expansion in previous years.

And given its size, China has an outsize effect on the world. China's share of the global economy climbed from 4.5 percent in 2000 to an estimated 11.3 percent last year, according to the World Bank.

"China is the second-largest economy in the world," said Paul Sheard, chief global economist at Standard & Poor's Ratings Services. "So when it slows, the rest of the world is impacted."

On Tuesday, the International Monetary Fund downgraded its forecast for the global economy for this year and next and pointed to China's slowing economy as a key factor. The IMF said China's growth would weaken to 6.8 percent this year and 6.3 percent in 2016. China's slowdown will dent growth in countries it imports from, especially in Asia, the report said.

China's 2014 expansion was its slowest since 1990, when growth tumbled to 3.8 percent — a result of economic sanctions imposed on China after its violent crackdown on the Tiananmen Square protests. Last year's 7.4 percent growth undershot Beijing's target of 7.5 percent, its first miss since 1998, according to analysts.

Economists expect the slowdown to deepen, clouding the outlook for the world economy as China transitions away from an era of supercharged but unsustainable growth that fueled demand for everything from Australian iron ore to European luxury goods.

The pain will be more intense in countries such as Australia and Malaysia that rely heavily on the Chinese market, said Nariman Behravesh, chief economist at IHS.

"Those most hurt will be the commodity-exporting countries in Africa and Latin America and China's neighbors," Behravesh said.

Chinese businesses are bracing for a more painful year.

"Competition will be even more difficult," said Han Yi, a sales manager at Tianjin Yihsin Packing Plastic Co., which employs 700 people making plastic cups and cookie packaging in Tianjin, about an hour southeast of Beijing.

Han complained that sales in 2014 dipped about 5 percent from the year before and the company had to improve product quality and reliability to compete for new clients. Even then, it was able to win only one new account from a rapidly expanding customer.

"The situation would be much worse if we could not win this new client," he said.

China's slowdown is partly intentional: Beijing wants to move the country away from super-fast growth based on often-wasteful investment in factories and real estate to sturdier but slower growth based on spending by Chinese consumers.

The slowdown "is by and large a good thing," S&P's Sheard said. "China was growing at an unsustainably fast pace."

But the transition, already difficult because consumers have never been the driving force behind China's growth, has been buffeted by a range of problems. They include a slumping property market and uneven exports.

Some analysts expect China to gradually provide economic stimulus this year to prevent growth from fading too fast. But they don't expect a major spending splurge. Debt is already at worrying levels after the government engineered a credit-fueled response to the 2008 global crisis.

"Credit risks will likely continue to prevent policymakers from using monetary policy too aggressively in order to shore up growth," said Julian Evans-Pritchard of Capital Economics, who forecasts 7 percent growth in China this year.

Consumption should receive a boost from the slump in global oil prices. But it's unlikely to fully offset the slowdown of investment in areas already suffering from overcapacity such as property and heavy industry, he said.

Chinese officials have tried to lower expectations by saying growth below the official target would be acceptable.

President Xi Jinping said last year that the economy has entered a "new normal." But a surprise interest rate cut by policymakers in November indicated they were worried about a spike in job losses.

Growth in the fourth quarter of last year was 7.3 percent, unchanged from the previous quarter, which was the slowest quarterly expansion in five years. China's economy grew 7.7 percent in 2013.

Staff at the Wanjiang Xiufang garment company in Dongguan, southern Guangdong province, said they were battling competition from an increasing number of rival factories even as consumer spending on the women's and children's clothing they make weakened.

"We need to produce new products with better quality but a lower price," Lin said. "I know it will decrease our profit, but we have to survive first," he said.

Bosch delivered millions of engine control systems that were installed on various manufacturers’ cars starting in 2008.
Jun 25th, 2020
Follow Us
Most Recent