The 162,000 jobs the economy added in July were a disappointment. The quality of the jobs was even worse. A disproportionate number of the added jobs were part-time or low-paying — or both. Part-time work accounted for more than 65 percent of the positions employers added in July. Low-paying retailers, restaurants and bars supplied more than half July's job gain. 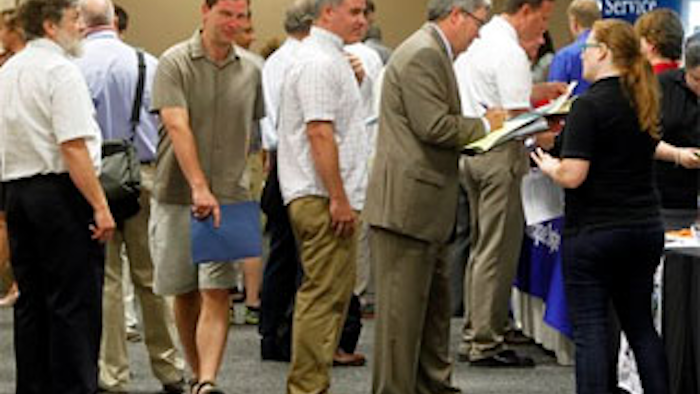 WASHINGTON (AP) — The 162,000 jobs the economy added in July were a disappointment. The quality of the jobs was even worse.

A disproportionate number of the added jobs were part-time or low-paying — or both.

Part-time work accounted for more than 65 percent of the positions employers added in July. Low-paying retailers, restaurants and bars supplied more than half July's job gain.

"You're getting jobs added, but they might not be the best-quality job," says John Canally, an economist with LPL Financial in Boston.

"The jobs that are being created are not generating much income," Steven Ricchiuto, chief economist at Mizuho Securities USA, wrote in a note to clients.

That's one reason Americans' pay hasn't kept up with even historically low inflation since the Great Recession ended in June 2009. Average hourly pay fell 2 cents in July to $23.98 an hour.

Among those feeling the squeeze is Elizabeth Wilkinson, 28, of Houston. After losing a $39,000-a-year administrative job at Rice University in January, Wilkinson found work at an employment agency for $15 an hour. Yet she's had to supplement that job with part-time work as a waitress.

"This morning I put $1.35 worth of gas in my car because that is all the money that I had," Wilkinson said via email. "It's very difficult to survive on $30,000 (a year), and I am living paycheck to paycheck."

Part-time work has made up 77 percent of the job growth so far this year. The government defines part-time work as being less than 35 hours a week.

Weak economies overseas have reduced demand for U.S. goods and, as a result, for better-paying U.S. jobs in manufacturing. Government spending cuts have taken a toll on some middle-class jobs, too.

Many employers have also discovered that they can use technology to do tasks more cheaply and efficiently than office workers used to do. And some have found that they can shift middle-class jobs to low-wage countries such as China.

By contrast, most lower-paying jobs — from waiters and hotel maids to store clerks, bartenders and home health care aides — can't be automated or shipped abroad.

"You're always going to have jobs in the retail sector," says Michael Evangelist, a policy analyst with the liberal National Employment Law Project, which advocates on behalf of low-wage workers.

Consider Mike Ulrich, 30, who earned a master's degree in public administration in May from the University of Colorado. Ulrich hasn't been able to find work that requires a college degree. Instead, he works at a hardware store in Spokane, Wash., earning the state's minimum wage: $9.19 an hour.

Not all July's new jobs were low-paying. Local schools hired more than 10,000 teachers and other employees. Financial firms added 15,000.

The surge in part-time employment began in April.

Jason Furman, the new chairman of the White House's Council of Economic Advisers, says part-time employment has been inflated by the across-the-board budget cuts that began to bite in March, forcing some federal workers to take time off without pay.

Analysts say some employers are offering part-time over full-time work to sidestep the new health care law's rule that they provide medical coverage for permanent workers. (The Obama administration has delayed that provision for a year and into 2015.)

But Furman disputed the idea that the health care law will ever drive companies to favor part-timers over full-timers and says the notion makes even less sense now: "Why would they shift people to part-time for something that's not going to happen until 2015?"

Scott Anderson, chief economist at Bank of the West, thinks concerns about the rise in part-time work are overblown. The government's figures on part-time jobs are highly volatile, Anderson notes. The big gain this year could quickly reverse, he says.

Yet for the most part, Daniel Alpert, managing partner of Westwood Capital, wrote in a report last month, "the only folks engaging in meaningful hiring are doing so because labor is cheap."

The low quality of the added jobs could help explain something that has puzzled economists: How has the U.S. economy managed to add an average of roughly 200,000 jobs a month this year even though it grew at a tepid annual rate below 2 percent in the first half of the year?

Some are proposing an answer: Perhaps a chronically slow-growth economy can't generate many good-paying jobs — but can produce lots of part-time or lower-wage retail and restaurant work.

Diane Swonk, chief economist at Mesirow Financial, recalls that the robust economic growth of the late '90s generated millions of middle-class jobs. And it pushed unemployment so low that short-staffed companies were forced to convert part-time jobs into full-time ones.