Two Iraq War veterans eager to slake a growing American thirst for craft beer are setting up a brewery less than a mile from the main runway for the Navy's East Coast master jet base. Their beers have names like "Jet Noise Double IPA and "Pineapple Grenade Hefeweizen." And their motto strikes a military chord: "Brewing With the Freedom We Fought For." 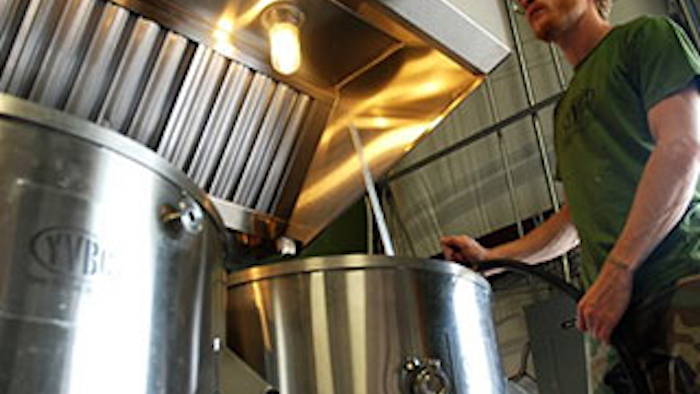 VIRGINIA BEACH, Va. (AP) — Two Iraq War veterans eager to slake a growing American thirst for craft beer are setting up a brewery less than a mile from the main runway for the Navy's East Coast master jet base. Their beers have names like "Jet Noise Double IPA and "Pineapple Grenade Hefeweizen." And their motto strikes a military chord: "Brewing With the Freedom We Fought For."

Young Veterans Brewing Co. is set to open in September in military-heavy Hampton Roads. For the brewery president, Thomas Wilder, and the co-founder, Neil McCanon, the business was born of struggles the two endured after they returned to American soil in 2005 from their overseas assignments.

The craft brewery is one of a growing corps popping up in Virginia and the nation. Virginia, which is celebrating its second craft beer month in August, has seen the industry grow from about 40 craft breweries last year to more than 60 in 2013. And many more are in the works.

The 29-year-old Wilder spent more than a year in Iraq after joining the Army National Guard in 2003 right out of high school. He lost two close friends in a 2004 bombing at a base in Mosul that killed 22 people, including 18 Americans. Wilder was in Germany getting surgery at the time of the bombing.

"Being at war is tough, but you don't realize how tough it is while you're there," Wilder said as the sound of F/A-18 fighter jets roared overhead from nearby Naval Air Station Oceana.

Upon returning home, Wilder tried his hand at school, hoping to become a teacher. McCanon, 29, went through a revolving door of hirings and firings. But both knew they wanted to work for themselves.

When they first experimented with a home brewing kit the high school friends from Virginia Beach received as a gift, Wilder said he was unfamiliar with craft beers. His knowledge then was limited to mass-produced domestic beers. But once he began brewing his own, he preferred his over all others.

The pair hosted house parties offering up free beer to friends and family to test their creations. Now they hope their dream of finally opening a brewery will provide an opportunity to hire other veterans and give back to military-related charities.

"For me, it's sort of my way of showing that after service there's more to do," Wilder said. "For a lot of soldiers who come home, there's a lot of trouble. I've been through that and I know what that's like."

The young veterans are joining ranks as the craft beer industry is "seeing the edge of expansion," noted McCanon, who joined the Army in 2003 and most recently was as an Army Reserve drill sergeant.

In Virginia, a budding interest in craft beer is helping brewers grow at a faster rate than the national average. And thanks to changes in state law, they are making an impressive impact on the economy.

Production in Virginia grew nearly 37 percent to more than 84,000 barrels in 2012, more than double the national growth rate of 15 percent, according to the Brewers Association, the trade group for the majority of U.S. brewing companies. With more than 2,480 breweries nationwide, craft brewers make up a more than $10.2 billion industry that sold about 13.2 million barrels of beer in 2012.

Despite the industry's recent success, Wilder and McCanon said opening the brewery about six years in the making has been harder than living in a war zone. The two faced resistance from banks when they sought loans. There were other obstacles along the way.

But ultimately, they raised most of their needed capital of about $250,000 from investors and an online crowdsourcing campaign. McCanon honed his skills apprenticing at another local brewery and attended the Siebel Institute of Technology, America's oldest brewing school.

For the first time last year, the state toasted the success of its craft beer industry with events at restaurants, breweries and bars throughout Virginia. The centerpiece of this year's monthlong celebration is the Virginia Craft Brewers Festival, which features the Virginia Craft Brewers Cup. The event is scheduled for Saturday at Devils Backbone Brewery southwest of Charlottesville along the Blue Ridge Mountains.

A National Beer Wholesalers Association and the Beer Institute study shows that the beer industry overall generates nearly 52,000 jobs in Virginia and an estimated $2.2 billion in wages and benefits. The industry also contributed $1.3 billion in the form of business, personal and consumption taxes in 2012, the study showed.

Mike Hinkley, co-founder of Green Flash Brewing Co., a San Diego-based craft brewery, said he was also drawn to Virginia by its growing "craft beer culture." That decade-old company plans to open its second brewery in 2015 in Virginia Beach, drawn by similarities with San Diego in that both are military towns with thriving tourist industries and strong local cultures.

The Green Flash facility is expected to be able to produce 100,000 barrels annually, more than all of the craft breweries in Virginia combined in 2012.

But McCanon and Wilder believe there's still room for everyone in the market.

"There's plenty of market for us all," McCanon said. "Craft beer customers are not the most loyal to one brand, but they're loyal to craft beer."