Hyundai's labor union said 46,000 workers will stage a four-hour strike over two days this week as the union increases pressure on the automaker for higher wages and benefits. Union spokesman Kwon Oh-il said Tuesday that talks with Hyundai Motor Co. management had made little progress. 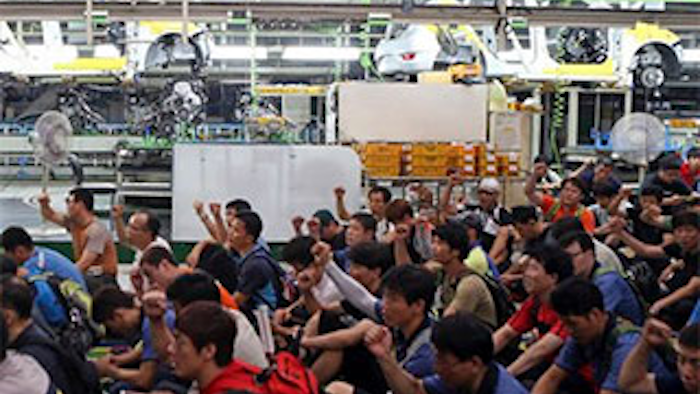 SEOUL, South Korea (AP) — Hyundai's labor union said 46,000 workers will stage a four-hour strike over two days this week as the union increases pressure on the automaker for higher wages and benefits.

The union demanded increased wages and benefits during three months of annual negotiations. But the talks collapsed, and the union voted to strike for a second time in two years.

Labor strife has dragged down earnings at Hyundai and its Kia affiliate after unions elected hard-line leaders. Earlier this year, Hyundai workers refused to work overtime for three weeks. That resulted in lost output of 83,000 vehicles worth 1.7 trillion won ($1.5 billion), according to the company. In 2012, the maker of the Elantra and Santa Fe estimated it lost production of 82,000 vehicles worth 1.7 trillion won due to 92 hours of walkouts.

Another round of talks with Hyundai Motor Co. management is scheduled for Thursday. Kwon said there is almost no chance of a breakthrough.

Hyundai estimated it would lose production of about 2,100 vehicles worth 43.5 billion won ($39 million) from the union's four hour strike and refusal to work overtime.

Hyundai said last week that many of the union's demands were hard to accept.

The labor union at Kia Motors Corp. is planning similar industrial action. Kia workers will determine how many hours they will walk out later Tuesday.