Ford says it will sink 700 million Canadian dollars ($680 million) into an assembly plant near Toronto to add models and meet increased demand for vehicles around the world. The investment will preserve the Oakville, Ontario, plant's 2,800 jobs and expand its manufacturing capability, the company said Thursday. 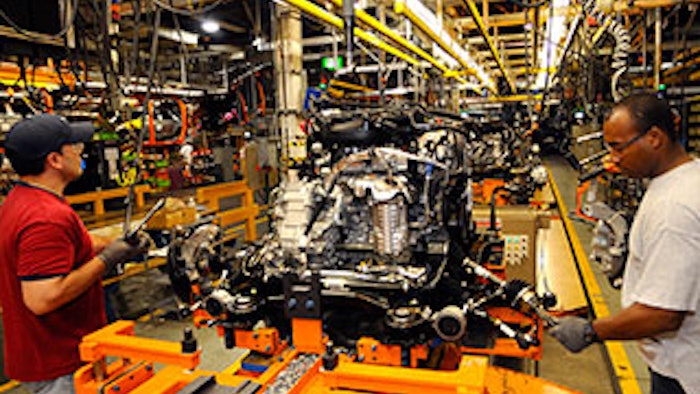 DETROIT (AP) — Ford says it will sink 700 million Canadian dollars ($680 million) into an assembly plant near Toronto to add models and meet increased demand for vehicles around the world.

The investment will preserve the Oakville, Ontario, plant's 2,800 jobs and expand its manufacturing capability, the company said Thursday.

The 5.5 million-square-foot plant now makes the Ford Edge and Flex crossover SUVs, as well as the Lincoln MKX and Lincoln MKT.

The investment is good news for Canadian auto workers, whose future looked bleak last year because they were paid higher wages than workers in the U.S. Several auto executives called Canada the most expensive place in the world to build automobiles. But about a year ago, the workers agreed to a new contract that cut U.S. automakers' costs in the country.

Ford Motor Co. said in a statement that it will bring several new models to the plant to meet rising sales in North America and elsewhere. The company wouldn't identify the models, but the plant is likely to get the next generation of the Edge and other crossovers.

The factory will become more flexible, with the ability to make more of a particular model if sales rise, the company said.

"If consumers suddenly shift their buying habits, we can seamlessly change our production mix without having to idle a plant," Joe Hinrichs, the company's president of the Americas, said in the statement.

Also as part of the investment, the company will increase fuel efficiency research and development efforts in Ontario.

Ford says work on the plant is already underway, with the changes expected to be done by the fall of 2014.

The investment comes about a year after Canadian auto workers voted in favor of a new cost-cutting four-year contract negotiated with Ford that made Canada more competitive with the United States and other countries for auto assembly.

The contract cut wages for new hires and froze pay for current workers. New hires now get about 20 Canadian dollars per hour, about 60 percent of the top wage paid to longtime union members. The new workers will move up the wage scale and reach the top pay in 10 years.

Ford said there would be significant cost savings realized through the wage structure for new employees. Canada's advantages in the past — a weak Canadian dollar and government health care — have all but vanished compared with U.S. factories.