Congress plunged the nation into a partial government shutdown Tuesday as a protracted dispute over President Barack Obama's signature health care law reached a boiling point, forcing some 800,000 federal workers off the job. Obama readied a midday statement to the nation as Democrats and Republicans maintained a blame-each-other duel on Capitol Hill. 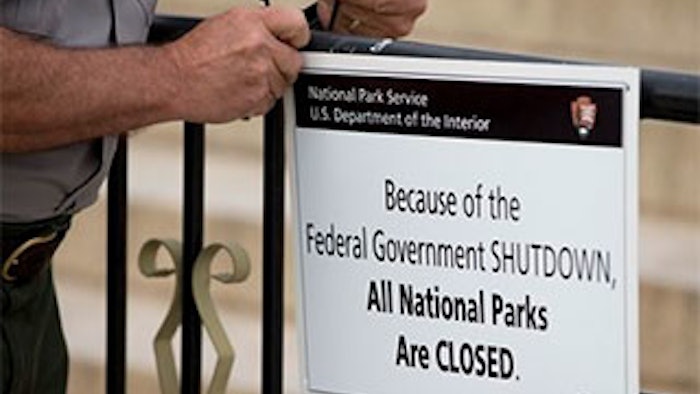 WASHINGTON (AP) — Congress plunged the nation into a partial government shutdown Tuesday as a protracted dispute over President Barack Obama's signature health care law reached a boiling point, forcing some 800,000 federal workers off the job. Obama readied a midday statement to the nation as Democrats and Republicans maintained a blame-each-other duel on Capitol Hill.

Even as Obama prepared to meet with citizens signing up for his health care program and then make a lunch-hour speech in the Rose Garden, the White House cut back to a skeletal staff. The U.S. Capitol canceled tours not personally led by Congress members. "Closed" signs and barricades sprang up at the Lincoln Memorial, and national parks and federal workplaces across the country were following suit.

With the Republican-controlled House and Democratic-controlled Senate stalemated, it was unclear how long the shutdown — and the loss of some government programs and services — could last. The Senate was poised Tuesday morning to reject the House's call to form a negotiating committee to consider delaying the health care law in exchange for restarting the government.

Obama communications director Jennifer Palmieri said the White House was open to changes in the health care law in future negotiations, but not as part of passing a budget bill.

"What we're not going to do is entertain those kinds of solutions when there is a gun pointed to your head," Palmieri told MSNBC.

The No. 2 Democrat in the Senate, Dick Durbin of Illinois, called the failure to pass a budget "conduct unbefitting a responsible Congress" and said he hoped it could be resolved by the end of the day Tuesday.

But in the House, conservative Rep. Marsha Blackburn predicted the standoff would drag on if Obama and Senate Democrats refused to negotiate.

"You may see a partial shutdown for several days," Blackburn, R-Tenn., told Fox News. "People are going to realize they can live with a lot less government."

The health care law itself was unaffected as enrollment opened Tuesday for millions of people shopping for medical insurance.

It was the first shutdown since a budget battle between Republicans in Congress and Democratic President Bill Clinton in the winter of 1995-1996.

Traffic was lighter and the subway less crowded in Washington Tuesday morning. The Smithsonian museums website displayed a red banner noting that "all Smithsonian museums and the National Zoo are closed." On the zoo's website, panda mom Mei Xiang could be seen snuggling with her weeks-old cub through the morning, until the feed was was abruptly cut off around 8 a.m. Care of the animals will continue.

Agencies like NASA and the Environmental Protection Agency were being nearly shuttered. People classified as essential government employees — such as air traffic controllers, Border Patrol agents and most food inspectors — will continue to work.

The White House was operating with a skeletal staff, including household workers taking care of the first family's residence and presidential aides working in the West Wing. A groundskeeper working outside Tuesday morning at daybreak said he was doing the job normally handled by four workers.

Given the shutdown, White House officials were discussing whether President Barack Obama should change plans for a trip to Asia scheduled to begin Saturday.

The military will be paid under legislation freshly signed by Obama, but paychecks for other federal workers will be withheld until the impasse is broken. Federal workers were told to report to their jobs for a half-day but to perform only shutdown tasks like changing email greetings and closing down agencies' Internet sites.

On Capitol Hill, lawmakers get to decide which of their staff members keep working and which are furloughed. Members of Congress will continue getting paid.

There were no "Closed" signs outside the Capitol or its adjacent visitor center early Tuesday warning tourists they would not be admitted for the usual tours. "That would be me," quipped one Capitol Police officer standing outside an entrance.

The Senate twice on Monday rejected House-passed bills that first sought to delay key portions of the 2010 "Obamacare" law, then to delay the law's requirement that millions of people buy medical insurance. The House passed the last version again early Tuesday naming negotiators for a Senate-House conference on the bill; Senate Majority Leader Harry Reid said the same fate awaits that measure when the Senate reconvenes Tuesday morning.

"You don't get to extract a ransom for doing your job, for doing what you're supposed to be doing anyway, or just because there's a law there that you don't like," Obama said Monday, delivering a similar message in private phone calls later to Republican House Speaker John Boehner and other lawmakers.

Boehner said he didn't want a government shutdown, but added the health care law "is having a devastating impact. ... Something has to be done."

It wasn't clear how long the standoff would last, but it appeared that Obama and Reid had the upper hand.

"We can't win," said Sen. John McCain, R-Ariz., adding that "sooner or later" the House would have to agree to Democrats' demands for a simple, straightforward funding bill reopening the government.

Another veteran Republican, Rep. Tom Cole of Oklahoma, called the shutdown "a big mistake." Interviewed on MSNBC, Cole called on House and Senate negotiations to end the impasse and insisted Democrats should yield on delaying the requirement that individual Americans have health coverage.

The order directing federal agencies to "execute plans for an orderly shutdown due to the absence of appropriations" was issued by White House Budget Director Sylvia Burwell shortly before midnight Monday.

Around the same time, Obama appeared in a video message assuring members of the military they'll be paid under a law he just signed and telling civilian Defense Department employees that "you and your families deserve better than the dysfunction we're seeing in Congress."

Defense Secretary Chuck Hagel said Tuesday that Pentagon lawyers are trying to determine ways for some of the Defense Department's 400,000 furloughed civilians to continue working.

He bemoaned the standoff, telling reporters traveling with him in South Korea, "It does have an effect on our relationships around the world and it cuts straight to the obvious question: Can you rely on the United States as a reliable partner to fulfill its commitments to its allies?"

The underlying spending bill would fund the government through Nov. 15 if the Senate gets its way or until Dec. 15 if the House does.

Until now, such bills have been routinely passed with bipartisan support, ever since a pair of shutdowns 17 years ago engineered by then-Speaker Newt Gingrich severely damaged Republican election prospects and revived then-President Bill Clinton's political standing.

Boehner had sought to avoid the shutdown and engineer passage of a "clean" temporary spending bill for averting a government shutdown.

This time tea party activists mobilized by freshman Sen. Ted Cruz, R-Texas, mounted a campaign to seize the must-do measure in an effort to derail Obamacare. GOP leaders voiced reservations and many Republican lawmakers predicted it wouldn't work. Some even labeled it "stupid."

But the success of Cruz and other tea party-endorsed conservatives who upset establishment GOP candidates in 2010 and 2012 primaries was a lesson learned for many Republican lawmakers going into next year's election.