Obama says the plan to use renewables for 20 percent of electricity needs will help reduce pollution that causes global warming, promote American energy independence and boost domestic energy sources such as solar and wind power that provide thousands of jobs. 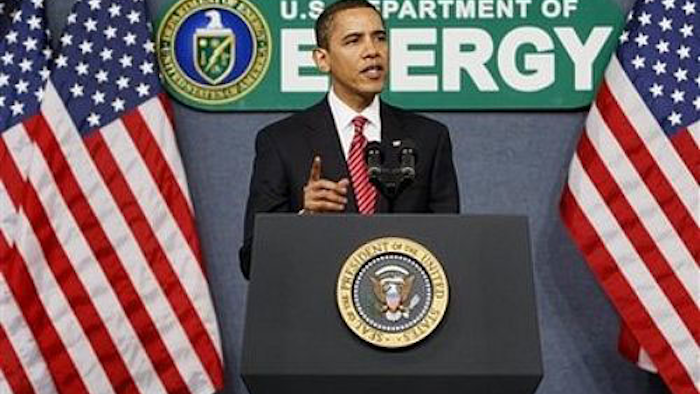 WASHINGTON (AP) -- Saying the government should lead by example, President Barack Obama is ordering the federal government to nearly triple its use of renewable sources for electricity by 2020.

Obama says the plan to use renewables for 20 percent of electricity needs will help reduce pollution that causes global warming, promote American energy independence and boost domestic energy sources such as solar and wind power that provide thousands of jobs.

Obama was set to announce the plan Thursday as part of his wide-ranging, second-term drive to combat climate change and prepare for its effects. A plan announced in June would put first-time limits on carbon pollution from new and existing power plants, boost renewable energy production on federal lands and prepare communities to deal with higher temperatures.

The Associated Press obtained an advance copy of the executive order on renewable energy, which applies to all federal agencies, civilian and military. The Defense Department has previously set a goal that 25 percent of its energy needs should be supplied by renewable energy by 2025.

Obama said federal agencies have reduced their greenhouse gas emissions by more than 15 percent since he took office in 2009 but said the government can do even better. The government should lead by example, he said.

The federal government occupies nearly 500,000 buildings, operates 600,000 vehicles and purchases more than $500 billion per year in goods and services.

The government currently has a goal of using 7.5 percent of its electricity from renewable sources, but Obama said recent increases in renewable energy supplies make the new 20 percent goal achievable by 2020.

The White House did not provide an estimate for how much money, if any, the proposal would save over the next decade.

The order on renewable energy is one of several steps the administration is announcing this week on energy efficiency.

On Tuesday, officials announced a plan to cut energy waste at multifamily housing such as apartments and condominiums and released a 2014 fuel economy guide to help motorists choose fuel-efficient vehicles.

As part of the administration's push to expand renewable energy, the Pentagon last year committed to deploying 3 gigawatts of renewable energy on Army, Navy and Air Force installations by 2025 — enough to power 750,000 homes.