Wanxiang Says It Might Build Fisker Cars In Del.

A Chinese auto parts conglomerate that wants to buy failed electric-vehicle manufacturer Fisker Automotive says it would build next-generation Fisker cars in Delaware if there is sufficient consumer demand. Wanxiang Group Corp. outlined its intentions in a court filing late Wednesday as it pushes for a competitive auction of Fisker's remaining assets. 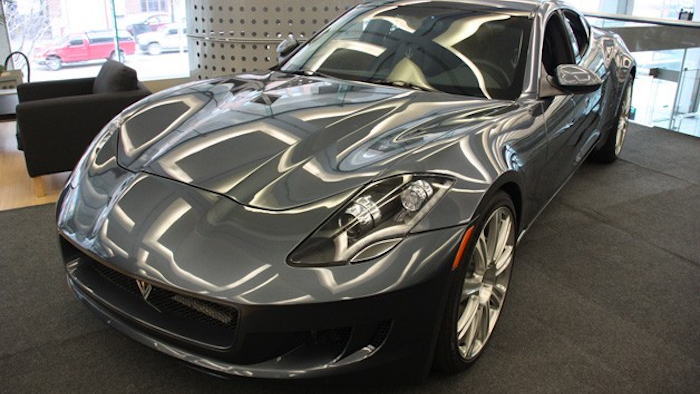 Wanxiang Group Corp. outlined its intentions in a court filing late Wednesday as it pushes for a competitive auction of Fisker's remaining assets. In an order issued late Thursday in advance of a scheduled Friday hearing, the judge presiding over Fisker's bankruptcy suggested that Wanxiang's proposal for an open bidding process is worth considering.

California-based Fisker, which had planned to build cars at the former General Motors plant in Delaware, filed for bankruptcy protection in November. The move culminated a long, downward spiral that began after Fisker received a $529 million loan commitment from the U.S. Department of Energy.

Wanxiang indicated in earlier court documents that it wanted to resume production of Fisker's problem-plagued first-generation car, Karma, in Finland and eventually shift production to a Michigan facility. That dealt a setback to hopes of Delaware officials that cars would be built at the former GM site, where Democratic Gov. Jack Markell and Vice President Joe Biden, Delaware's former senior U.S. senator, announced with great fanfare in 2009 that Fisker would revive vehicle production.

But in Wednesday's court filing, Wanxiang said it intends not only to resume Karma production, but to continue development and design of a second-generation line of Fisker vehicles. Once such vehicles are ready for mass production "in volumes that necessitate a separate manufacturing facility," Wanxiang intends to manufacture them at the now-shuttered GM plant in Wilmington.

Markell, whose administration provided about $20 million in loans and grants to Fisker to build cars in Delaware, welcomed the news of Wanxiang's intentions.

"The sole purpose of the state's loan and grant was to provide a future for a sector of the Delaware economy hard hit by the recession, so we strongly support any path forward that could lead to that result," Markell said in an emailed response for comment.

"The statement by Wanxiang — a company that employs thousands of Americans in dozens of manufacturing plants across the United States — about utilizing the Delaware plant is a positive development," Markell added.

It remains unclear, however, whether Wanxiang, which recently bought the company that served as Fisker's primary battery supplier following a separate bankruptcy case, will be able to take control of Fisker itself.

Hybrid now wants to buy Fisker in a quick, private sale, using a $75 million credit bid based on its position as Fisker's senior secured lender. Hybrid has indicated that it likely would resell the former GM plant if it is included in an asset sale, suggesting it has no interest in building cars in Delaware.

In a strongly worded order Thursday, U.S. Bankruptcy Judge Kevin Gross denied Fisker's request that he slap a zero-dollar estimate on the claims of 157 former Fisker employees. The former employees say they were not given adequate notice before being abruptly laid off last year and that they are owed about $3.8 million. In his order, Gross scheduled an evidentiary hearing on the issue for Jan. 31, and he took Hybrid and Fisker to task for trying to ram through their proposed sale "at break neck speed."

"The debtors' bankruptcy is a tragedy for many while the purchaser tries to purchase the Fisker assets using discount dollars," the judge wrote. "United States taxpayers, Delaware taxpayers, employees, unsecured creditors are all losers. The emergence of another very interested, cash-paying suitor, Wanxiang America Corporation, may enhance creditor recoveries and shows the mischief from undue speed."

Fisker's official committee of unsecured creditors, working with Wanxiang, is opposing the Hybrid sale and pressing for a competitive auction starting with a cash bid of $35.7 million by Wanxiang. Wanxiang's plan is contingent on the court capping Hybrid's credit bid at $25 million, which would force Hybrid to come up with more cash than it has offered so far.

Hybrid has offered about $2 million in cash to go along with its $75 million credit bid. It also has agreed to waive millions in fees it would be due for serving as Fisker's lender during the bankruptcy. Wanxiang is seeking to supplant Hybrid as Fisker's "debtor-in-possession" lender.

Markell said he hopes the judge will allow "a fair and full evaluation of all proposals to acquire Fisker's assets."

The Delaware Economic Development Authority, which gave the $20 million in state loans and grants to Fisker, submitted a court filing late Thursday in favor of the creditors committee proposal, or any other sale process that could result in resumption of vehicle production in Delaware. The filing included a joint statement from U.S. Sen. Tom Carper and Congressman John Carney supporting an open bidding process.

Federal officials suspended the loans after Fisker failed to meet several sales and production milestones for its $100,000 Karma luxury car. The Karma's problems included vehicle fires and recalls, problems with battery packs, the bankruptcy of Fisker's primary battery supplier, and inventory losses from Superstorm Sandy, which destroyed hundreds of vehicles at a port in New Jersey.