Senator Coons: Manufacturing Jobs Must Be A Focus Of State Of The Union 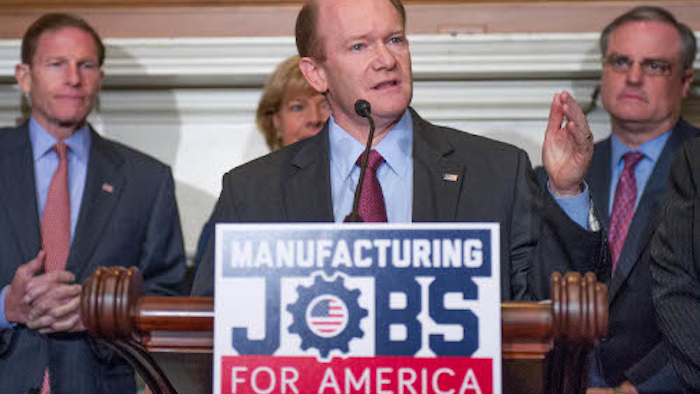 “This is about fighting for American workers,” Senator Coons said on Monday. “Not just those who are long-term unemployed, who are a core concern, but those who are underemployed, and those who are working two jobs. What I hear from Delawareans, week in and week out, is that they used to work at the auto plant and now they’re working two jobs to make half as much as they did at the auto plant. They want to hear the President stand up at the State of the Union and say that we’re going to fight for the middle class by growing manufacturing in this country.”

Speaking at an event hosted by the Alliance for American Manufacturers on Monday, Senator Coons, who leads theManufacturing Jobs for America campaign in the Senate, discussed a meeting at the White House on January 15th where he urged the President to focus on manufacturing jobs in the coming year.

“Given the opportunity, I wanted to emphasize where he’d been that day — North Carolina — and what there is right in front of us in terms of a package of bills,” Senator Coons explained. “I took my five minutes to reference a great bill that Kay Hagan has dealing with skills certification; a bill that Al Franken has dealing with strengthening the role of community colleges; and sort of went around the caucus and said, ‘Mr. President, there is a bill here, a bill here, a bill here, and you’ve got real partners. These are bipartisan bills. You can elevate the visibility and trajectory of manufacturing and job creation in the State of the Union, and there is immediate progress that’s possible in this caucus and in the Senate.’ There were five different senators who spoke about manufacturing and urged the President to make some recognition of its importance.”

New polling data generated jointly by Democratic and Republican firms and released by the Alliance for American Manufacturers on Monday revealed that, among voters who struggling to get by, the loss in manufacturing jobs ranks above taxes, diminishing quality of life, and income inequality as the biggest concern. The poll also revealed that voters blame policies — not economic forces like globalization, automation, or a shortage of skilled workers — for the recent slow growth in new manufacturing jobs.

Since its debut in October, Manufacturing Jobs for America has grown to include 44 bills from 26 senators. Thirty of the bills have already been introduced — 14 with bipartisan support — around four principles: strengthening America’s 21st century workforce; opening markets abroad; creating the conditions necessary for growth; and expanding access to capital.

“We can regain our leadership in manufacturing,” Senator Coons said. “We have one of the most productive manufacturing workforces in the world, and there are things we can and should do on a bipartisan basis. Bipartisan action is possible and relevant.”

More on Manufacturing Jobs for America can be found here: http://coons.senate.gov/manufacturing

Supply chain problems hit the hog maker.
May 19th, 2022
Follow Us
Most Recent