The U.S. auto industry, already stretching to meet rising demand for cars and trucks, is facing shortages of parts and materials that could limit the number of new vehicles in showrooms later this year and crimp a historic turnaround. 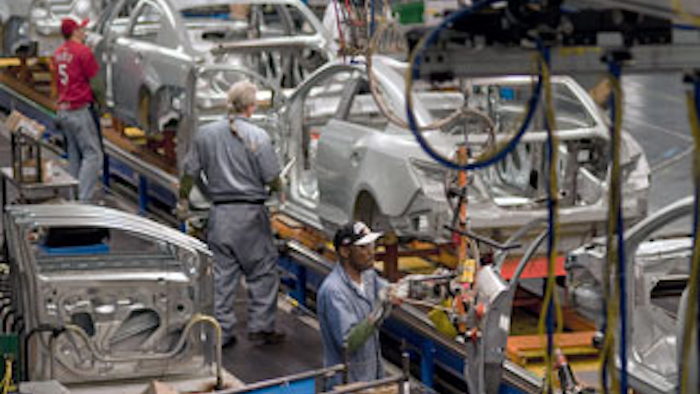 DETROIT (AP) — The U.S. auto industry, already stretching to meet rising demand for cars and trucks, is facing shortages of parts and materials that could limit the number of new vehicles in showrooms later this year and crimp a historic turnaround.

The most immediate problem — a shortage of a crucial plastic resin, caused by an explosion March 31 at a plant in Germany — could surface in a few weeks. And later this year or beyond, automakers could be confronted with an even bigger crisis, running short of parts simply because there aren't enough factories and people to make them.

No one is entirely sure how many plants or models will be affected by either problem. Automakers say they are working to avoid shortages in both cases. But it may be tough to manage the intricate chain of companies that make most of the 3,000 parts that go into every car, from tiny valves and computer chips to heavy metal castings for transmissions.

"A lot of them are under pressure because they reduced their staff and temporarily mothballed some of their factories," said Jim Gillette, an analyst with IHS Automotive. "A number of them are struggling to keep up at the moment."

The broader parts shortage dates to the auto industry's near-collapse in 2008 and 2009, when sales plummeted and General Motors and Chrysler were forced into bankruptcy protection. From 2008 to 2011, parts makers cut back on people, closed factories and sold off equipment.

During the downturn, at least 57 parts makers closed, were bought out or went into bankruptcy, according to the Original Equipment Suppliers Association. Nearly 20 percent of auto parts workers — more than 100,000 people — lost their jobs from 2008 through 2011.

U.S. auto sales dropped to a 30-year low of 10.4 million in 2009 but are on the rebound. Last year, they grew to 12.8 million, and analysts are predicting 14.5 million or more this year. If sales rise above 15 million, some automakers will run short of parts, crimping the supply of certain models, said J. Scot Sharland, executive director of the Automotive Industry Action Group, a trade association.

"There's a genuine concern that if that happens, we're going to certainly have some spot outages" at auto assembly plants, Sharland said. "There's still a significant amount of pent-up demand in the market."

Global automakers are vulnerable to such disruptions because they don't keep big stockpiles of parts the way they did two decades ago. Instead, to hold down warehouse and inventory costs, they rely on a "just in time" system in which parts are delivered just days or hours ahead of when they are needed.

The problem already has surfaced at GM, which has been forced to slow production of the hot-selling Chevrolet Equinox midsize SUV because a parts supplier can't keep up. GM wouldn't identify the part but has been telling dealers they cannot order as many four-cylinder Equinoxes as they might want. The automaker said the situation is nearly fixed.

GM is aware of the broader problem and is working with parts companies to help deal with rising demand. The company has even simulated what would happen if sales rose further, identifying suppliers that would be at risk, spokeswoman Kelly Cusinato said.

In anticipation of the increase, many parts makers have started hiring and are buying equipment to increase production. But they're having trouble finding machines and people with the skills needed to run them.

At LTC Roll and Engineering Inc. in Clinton Township, Mich., north of Detroit, sales are rising. LTC makes rocker panels, or structural metal pieces that run along the side of cars and trucks, for GM, Chrysler and other automakers. The company hired 20 people this year to meet demand, bringing its workforce to about 100. More hiring is possible.

Like many suppliers, LTC is looking for ways to raise output and avoid shortages, but Russ Senkowski, business development director, said it will be a challenge throughout the industry: "Everybody's pretty much maxed-out on their equipment capacity."

Principal Manufacturing Corp. in Broadview, Ill., near Chicago, has added about 15 workers in the past two years and now has 350 making seat parts, door and trunk latches and other components. Sales are up for most of its products, and the company also may buy more equipment.

The looming resin shortage resulted from an explosion and fire at a plant that made at least one-fourth of the world's supply of PA12, a key component in plastic fuel lines and other connections. The ingredient is crucial because it helps the tubes resist deterioration from carrying fuel. It is also used in seats and in products for other industries. Evonik Industries said the plant will be out of commission for at least three months.

Automakers and suppliers are working together to try to avert plant shutdowns because of the resin shortage. They are trying to figure out how many finished parts are available, how much resin is in stock, how best to use it, and what could serve as a substitute, said Sharland, who led an industrywide meeting Tuesday to deal with the crisis.

Crises like this aren't new for the industry. The earthquake and tsunami that hit Japan last year knocked out parts plants and forced the industry to scramble for alternatives. The crisis hit Honda and Toyota hardest, but all automakers had to make adjustments.

For example, a Japanese factory that was the only source of a unique paint pigment was disabled, forcing automakers to limit color choices.