Ghosn said the Japanese automaker remains committed to producing 1 million units per year in Japan despite the strong yen. 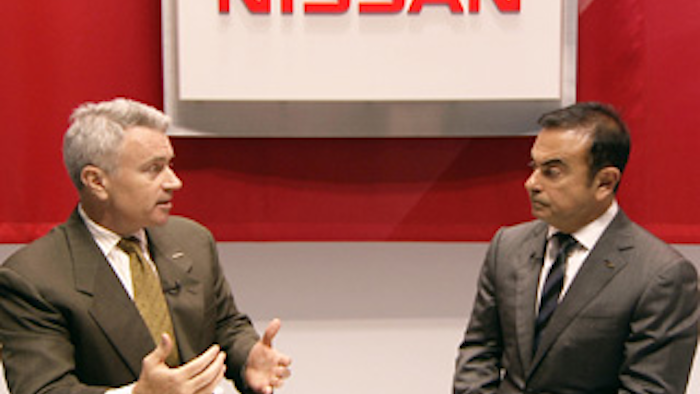 "We have taken the commitment to build at least one million cars in Japan and we are holding it...even though the yen is abnormally strong," Ghosn told a press gathering, adding he is hopeful the yen's strength will ease in the medium term.

For the company, which exported 740,000 of the 1.19 million vehicles it produced in Japan in fiscal 2011 ended March, the country will remain a significant export base, he said.

While Nissan is aiming to "minimize exports from Japan" in the current business year, it plans to raise domestic output by 2 percent to 1.22 million units from the level a year earlier, expecting robust sales in Japan on the back of a government subsidy program for eco-friendly vehicles.

The automaker has been constructing new plants in emerging markets, including Mexico, and Ghosn indicated his intent to expand overseas output further, saying, "We are going to have to continue to build more plants and add capacity."

Regarding its struggling electric vehicle sales, Ghosn admitted it "doesn't follow a linear curve," but added, "You can expect acceleration of the sales to take place, particularly with the development of infrastructure, and particularly with more governments taking stronger stance favorable to electric cars."

In April, China said it will aim to produce and sell over 5 million units of electric vehicles and plug-in hybrids by 2020.