U.S. manufacturing, one of the strongest areas of the economy since the recession ended nearly three years ago, rebounded in April after a March lull. 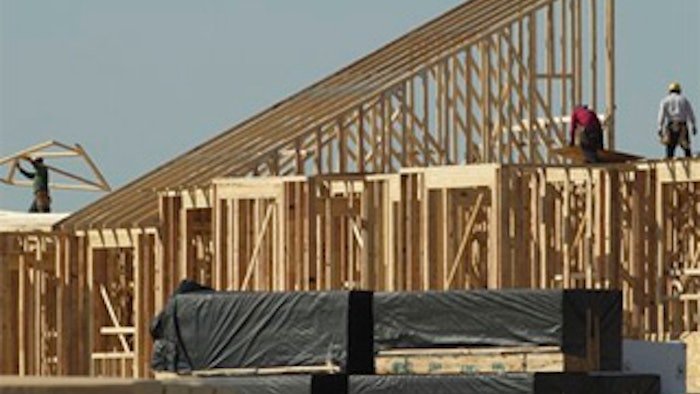 Home construction is near a three-year high. And factory output has risen in three of the year's first four months.

The data released Wednesday suggest growth in the April-June quarter is off to a good start, helped by falling gas prices and solid hiring gains. Fears of a spring slump are easing.

Builders broke ground in April at a seasonally adjusted annual pace of 717,000 homes, the Commerce Department said. That nearly matches January's pace, the best since October 2008.

Construction rose for both single-family homes and apartments.

Some economists have noted that a warm winter led companies to move up some hiring and accelerate other activity — including homebuilding — that normally wouldn't occur until spring. That gave the appearance that the economy had strengthened in January and February and weakened in March.

But Ashworth noted that the overall trend in housing starts has been running at roughly the same annual pace — approximately 700,000 — over the past six months. That's 100,000 more on average than the pace for the previous six months.

Ashworth said the higher level suggests demand is increasing and the mild winter had less effect than some economists had thought.

"We expect starts to strengthen further this year," Ashworth wrote in a note to clients.

Even with the gains, the rate of construction for all homes is only about half the 1.5 million annual pace that most economists consider healthy. But the increase, along with rising builder confidence and stronger job growth, is a sign that the home market may finally be starting to recover nearly five years after the housing bubble burst.

The growth in single-family home construction is important because those homes make up roughly 70 percent of the market. Since the recession, homeownership has declined while demand for apartments has surged.

"Homebuilders are reporting stronger demand," Ian Shepherdson, an economist at High Frequency Economics, said in a note to clients. "And while rental demand means the multi-family sector is much stronger than single family, that will change as the labor market improves further."

U.S. manufacturing, one of the strongest areas of the economy since the recession ended nearly three years ago, also rebounded in April after a March lull.

Factory output is now 18.3 percent higher than its low hit in June 2009, the month the recession ended. It's only 6.1 percent below its pre-recession peak.

Factories are busier in part because automakers are selling more cars and trucks. Half of the April increase in factory output reflected a 3.9 percent jump in the production of motor vehicles and parts. That was the fifth straight gain at auto plants.

Production also rose at a wide range of companies in April, from makers of computers and electronics to aerospace and furniture factories.

The modest gain shows that U.S. manufacturers aren't cutting back in the face of Europe's financial crisis and slower growth in China.

Faster output at U.S. factories has been a key reason employers have added 1 million jobs over the past five months. It's also helped lower the unemployment rate from 9.1 percent in August to 8.1 percent last month.

More jobs, along with record-low mortgage rates and low home prices, are making home buying more attractive to some Americans.

And gas prices have dropped in the past month after surging earlier this year. So consumers have more money for other purchases. The average price of a gallon of gas was $3.73 on Wednesday, according to AAA. That's 18 cents less than a month ago.

Some hurdles to a smooth recovery remain: Builders are struggling to compete with deeply discounted foreclosures and short sales. (Short sales occur when a lender accepts less than what's owed on a mortgage.)

And many would-be buyers are struggling to qualify for home loans or can't afford larger down payments that banks require.

Though new homes represent just 20 percent of the overall home market, they have an outsize impact on the economy. Each home built creates an average of three jobs for a year and generates about $90,000 in taxes, according to the National Association of Home Builders.