Beijing is seeking to tame the spikes in its infamous smog by preparing emergency measures such as factory shutdowns and traffic limits to kick in when air pollution levels are especially heavy. 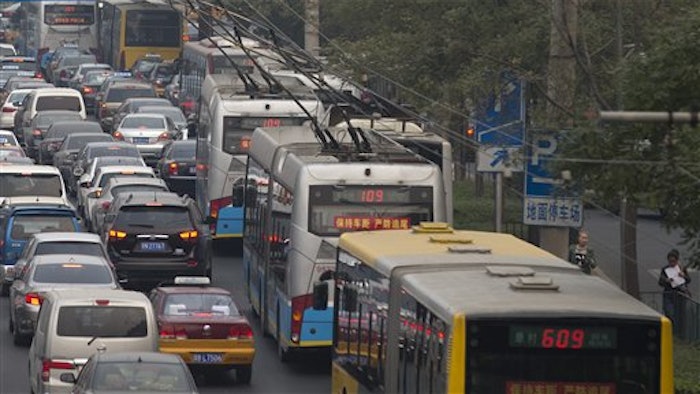 BEIJING (AP) -- Beijing is seeking to tame the spikes in its infamous smog by preparing emergency measures such as factory shutdowns and traffic limits to kick in when air pollution levels are especially heavy.

The city government said Tuesday the strictest emergency measures will take effect when the pollution index for fine particulate matter, PM2.5, is forecast to exceed 300 micrograms per cubic meter for three days running.

Private vehicles will be allowed to operate only on alternating days, depending on the last number of their license plates. Factory emissions will be cut 30 percent by suspending or limiting production, and construction sites must halt excavation and demolition work. Classes will be suspended, a measure likely to cause inconvenience in a city where most parents both work.

The measures require precise pollution forecasting and timely public notification to be effective, and there was obvious skepticism in the questions asked by Chinese reporters at a briefing announcing the emergency measures.

They apply only to industries and individuals in Beijing, despite the fact that as much as 60 percent of the city's air pollution wafts in from neighboring provinces, such as Hebei to the south.

"We have no control over Hebei, but this is a national priority and we hope we can be a positive role model," Fang Li, vice director of the city's Environmental Protection Bureau, told reporters.

A sprawling city of more than 20 million people, Beijing saw air pollution levels spike this year despite the imposition of more than 100 control measures that are enforced with varying strictness.

Vehicle emissions are blamed for about a quarter of the pollution, with coal-fired plants and factory production blamed for most of the rest.

Odd-even license plate traffic restrictions and limits on industrial activity were first rolled out as temporary measures during the 2008 Summer Olympics, after which the city enjoyed a brief improvement in air quality.

Cleaning up the air is considered a decades-long project and Li said the emergency measures to deal with pollution spikes were just part of a program to reduce the use of coal and rein in other forms of pollution.

"The purpose of these measures announced today is merely to try to arrest the deteriorating trend," Li said.