A judge has given a dose of cold water to Sriracha, ruling Tuesday that the factory that manufactures the trendy hot sauce must partially shut down after neighbors complained of the spicy smells it was producing. 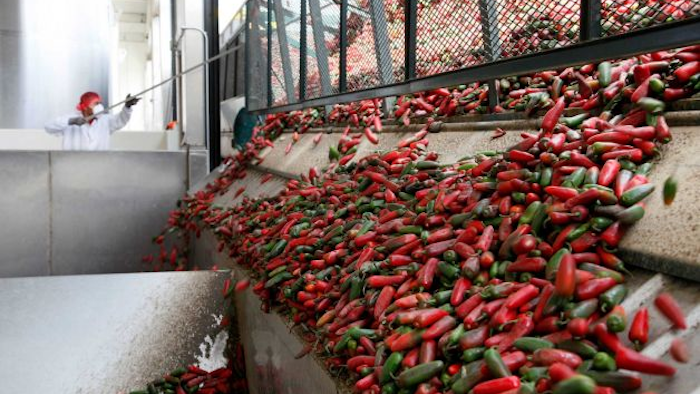 LOS ANGELES (AP) -- A judge has given a dose of cold water to Sriracha, ruling Tuesday that the factory that manufactures the trendy hot sauce must partially shut down after neighbors complained of the spicy smells it was producing.

Judge Robert H. O'Brien found in favor of the city of Irwindale where Sriracha recently relocated, saying sauce maker Huy Fong Foods must stop any operations that could be causing the odors and make changes to mitigate them.

O'Brien's injunction, given in response to a lawsuit filed by the city on Oct. 21, does not specify what types of actions are required or force the factory to shut down altogether, the Los Angeles Times (http://lat.ms/17SSD2h) reported.

Huy Fong Foods did not immediately respond to requests for comment from the Times or The Associated Press.

The company had previously argued that there is no reason to close the plant now because harvest season and subsequent grinding of red-hot Jalapeno peppers, the sauce's key ingredient, has passed. That suggests that the injunction may not have a major immediate effect on the company's production or the nation's hot sauce supply as Huy Fong keeps up its year-round mixing and bottling.

The judge acknowledged there was a "lack of credible evidence" linking locals' complaints of breathing trouble and watering eyes to the factory. But he said the odor that could be "reasonably inferred to be emanating from the facility" is, for residents, "extremely annoying, irritating and offensive to the senses warranting consideration as a public nuisance."

"We believe it's a strong ruling that acknowledges and is reflective of the concerns that the community has raised about the health impacts of the odor," City Attorney Fred Galante said.

The case could still go to trial, but Galante said the city would like to see a settlement outside court, and does not want to shut down Sriracha altogether.

"We're going to try to keep having a conversation with Huy Fong," Galante said, and hopes to find a collaborative way to "make sure the odor problems are addressed."