At the end of December 2013, Volvo Construction Equipment’s site in Braås, Sweden, completed its journey towards becoming carbon dioxide neutral.  It is the first construction equipment production facility in the world to be powered entirely by renewable energy. 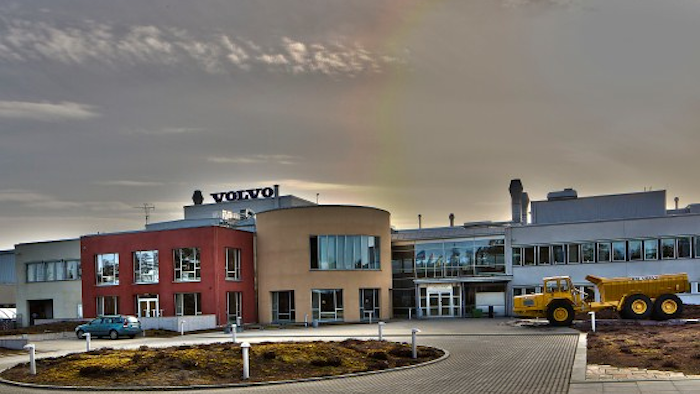 GÖTEBORG, Sweden--No harmful emission, no contribution to the greenhouse effect. At the end of December 2013, Volvo Construction Equipment’s site in Braås, Sweden, completed its journey towards becoming carbon dioxide neutral. It is the first construction equipment production facility in the world to be powered entirely by renewable energy.

The 45,000 m2site which specializes in the design and manufacture of articulated haulers is now powered entirely by wind, biomass, and hydropower.

The achievement follows in the footsteps of the Volvo Group Truck facility in Ghent, Belgium, which set the standard for emissions-free industrial manufacturing in 2007. And just as Ghent became the first carbon neutral facility in the automotive sector, Braås too becomes the first in its respective industry.

“As one of our core values, environmental care informs everything we do at Volvo,” says Niklas Nillroth, Volvo CE’s vice president of Core Value Management & Corporate Social Responsibility. “So we are extremely proud that the Volvo Group is leading the way, not just in one industry, but two.”

Braås’ first step towards carbon neutrality began in 1999, when it commissioned local energy supplier Växjö Energi AB to install a district heating plant, fuelled by wood chips, to provide central heating for its employees – and the town’s residents. Braås then joined a Volvo Group initiative in 2007 that saw it switch to green electricity (i.e. generated from renewable sources).

These first two initiatives brought the site’s level of CO2 neutrality to 87 percent in 2008, with the final push to reach 100 percent beginning two years ago. Staff identified the greatest source of energy consumption as the liquefied petroleum gas burners, which were used to heat the rust protection treatment ovens to 60°C. These were systematically replaced from September 2013 with district heating. The burners in the component paint shop, which reach temperatures of 120°C, were also altered to electrical heating. In addition, the site’s diesel forklifts were substituted with electric battery models.

Meanwhile, locals and the site’s 1,000 employees challenged Växjö Energi AB to run the district heating plant on biomass only – regular oil had previously also been used during peak times and maintenance. “This is a tremendous achievement driven by the dedication and tenacity of employees at Braås,” says Nillroth. “But we couldn’t have achieved it without the ready availability of green power in Sweden and the support of our local community.”