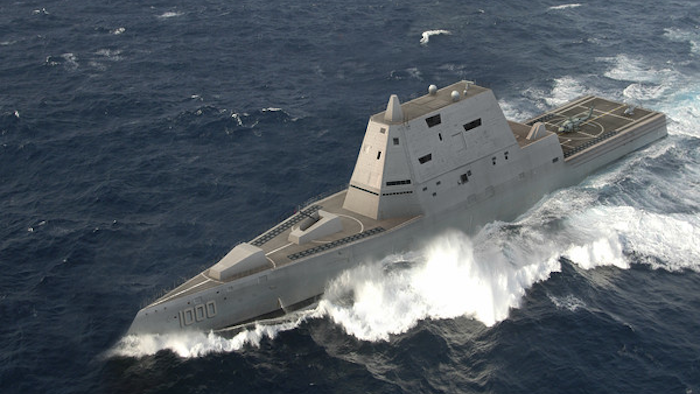 Engineers and technicians have spent months testing systems and preparing for lighting the marine turbines, which are similar to units used on the Boeing 777. Powered by military-grade jet fuel, the massive turbines will provide the grunt for electric generators that'll drive the largest destroyer ever built for the U.S. Navy.

Spokesman Matt Wickenheiser said one of the main turbine units was started for the first time on Tuesday.

When it heads to sea next year for builder trials, the 610-foot-long warship will be the first electric-drive surface combatant built for the U.S. Navy since a line of smaller destroyer escorts in the 1940s. The Zumwalt's two main generators, along with two auxiliary units, can produce 78 megawatts, enough electricity for about 10,000 homes.

Originally envisioned as a "stealth destroyer," the ship features a composite deckhouse that hides radar and antennas along with sharp angles that deflect radar signals. Its unusual wave-piercing hull was designed to minimize the ship's wake.

The Zumwalt's big price tag — more than $3.5 billion — nearly caused the Navy to scuttle the program. Instead, it reduced the number of ships to just three. The builder, Bath Iron Works, is a subsidiary of General Dynamics.