An Apple Inc. supplier in eastern China has denied allegations by a New York rights group that its workers toil for ten-hour shifts in loud, polluted conditions, without proper overtime pay or adequate safety protections. 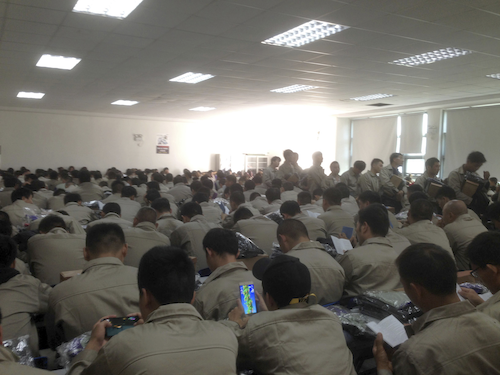 SHANGHAI — An Apple Inc. supplier in eastern China has denied allegations by a New York rights group that its workers toil for ten-hour shifts in loud, polluted conditions, without proper overtime pay or adequate safety protections to make MacBook and iPhone parts, before returning to filthy dormitories with cold showers.

The charges highlight the difficulty of managing complex global supply chains — even for companies, like Apple, that have publicly embraced ethical sourcing as a business priority.

Catcher Technology Co. Ltd., which runs the factory in Suqian, about 500 kilometers (310 miles) northwest of Shanghai, said Wednesday in a statement that it had investigated and "verified that none of the claims are accurate." Catcher also said it was about to acquire land near the factory to build new dormitories because it was "driven to enhance the living standard for our employees."

China Labor Watch said its findings, published late Tuesday, were from an undercover investigation that ran from October 2017 to January 2018.

It said workers without proper gloves had irritated, peeling skin on their hands. Others had machine oil splashed in their eyes. The main door of the workshop opened only 30 centimeters (12 inches) and dormitories lacked emergency exits — clear fire hazards, China Labor Watch said.

The report included photographs of cramped, slovenly dormitories and photos of foamy wastewater that China Labor Watch said was overflowing onto sidewalks.

Apple Inc. said it maintains a monitoring team onsite at the Catcher factory, which has made "significant progress" in raising standards since 2012. In response to China Labor Watch's allegations, Apple said it sent an investigative team to Suqian to interview over 150 workers but "found no evidence that Catcher was violating our standards."

"We know our work is never done and we investigate each and every allegation that's made," an Apple spokesperson said Wednesday. "We remain dedicated to doing all we can to protect the workers in our supply chain and make a positive impact on the environment."

The displays can stay illuminated for more than 10 seconds after the vehicles are shifted out of reverse gear.
Associated Press
Apr 8th, 2020

The agency’s Energy Information Administration projects a 7.5% drop in fossil fuel emissions for 2020, the most significant since 1990.
Ellen Knickmeyer
Apr 8th, 2020