Workers To Be Reassigned After Michigan Power Plant Fire

A utility is reassigning workers from a power plant northeast of Detroit and can't say when the facility they worked at will be reopened following a massive fire. 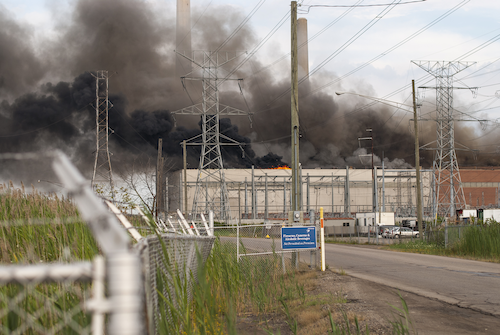 EAST CHINA TOWNSHIP, Mich. (AP) — A utility is reassigning workers from a power plant northeast of Detroit and can't say when the facility they worked at will be reopened following a massive fire.

"As of 5 p.m. Friday, DTE's access to the plant remains limited, as teams continue to assess the situation," the utility said. "The plant remains closed, and we do not have an estimate as to when the plant will reopen."

Fire crews on Friday extinguished the blaze that was reported about 6:30 p.m. Thursday and sent smoke into the air that was visible for miles, officials said. The fire started in a coal-fired generating unit, and no injuries were reported.

"DTE teams successfully invoked emergency procedures and shut down all generating units at the site while working with first responders to successfully control the situation," DTE Energy said in a statement Friday.

Firefighters from across St. Clair County were called to the plant about 40 miles northeast of Detroit and along the St. Clair River as thick, billowing black and gray smoke rose from the burning structure. Employees were safely evacuated.

Traffic was detoured away from the plant.

The St. Clair Fire Department said Friday that crews went into the building overnight to look for hot spots and remained at the plant, located along the U.S. border with Canada.

A noise from the plant caught Mary Buslepp's attention shortly before she noticed the smoke. Buslepp has lived near the facility about a dozen years.

"They blow the stacks occasionally, but this was unusually loud," she told the Times-Herald of Port Huron.

The plant has been in service since 1953 and the utility said the facility has 294 employees overall.

DTE said in June that coal-fired units at the plant are among eight at three of its facilities that are slated to be shut down within the next seven years. The units in East China Township, the River Rouge facility in the Detroit area and the Trenton facility in suburban Detroit are to be retired between 2020 and 2023.