Tuesday saw the first shipment of raw latex shipped to the former condom factory in Eufaula where they will open Ameritex, which will be the only latex factory operating in the United States. 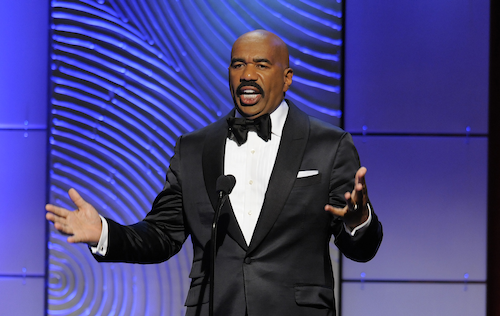 EUFAULA, Ala. (AP) — When television personality and comedian Steve Harvey was told about an investment opportunity in Eufaula, he asked his business partners one question.

"'Will it create jobs for an un-served community that needs economic development and impact?'" recalled Ceasar Davis, director of global business development & strategy for Harvey's World Group out of Chicago.

"Steve is a great business man," Davis added. "He loves to use his brand to help communities. He doesn't need the money, but he said 'If it'll create jobs, I'm there.'"

Tuesday saw the first shipment of raw latex shipped to the former condom factory in Eufaula, where Harvey and business partner Greg Calhoun of Montgomery — their group is named Harcal — will open Ameritex, which will be the only latex factory operating in the United States. Calhoun expects the first gloves to be shipped from the plant within two weeks.

"We already have commitments from Wal-Mart and other companies and we're hoping to get Tyson Foods soon," Calhoun said. "We're also hoping to get into TSA (Transportation Security Administration)."

Latex is tapped from the Havea brasiliensis tree, also known as the "rubber tree." While there are other glove factories, Ameritex in Eufaula will be the only one making latex gloves, now that they have moved mainly to Asia. Ameritex General Manager Bill Fylstra said the need for the plant is obvious due to shipments by boat taking 60 to 70 days and the need for large storage areas. With latex available via a short semi-truck ride from Savannah, Georgia, Fylstra said this will be especially efficient.

The Eufaula plant was originally built in 1988 to manufacture medical latex gloves. Those jobs were eventually sent to Malaysia. Upon the AIDS epidemic in Africa, the factory began manufacturing condoms, but eventually closed in 2008.

"Steve has been here about three times," Calhoun said. "He has been very impressed with the reception of the people here. We could not have found a better place to have a glove factory."

Eufaula Mayor Jack Tibbs said having Harvey as a name associated with the new plant is about as positive as it could get for the town.

"Getting Steve involved is major for our town," Tibbs said. "With one phone call, he can promote Eufaula like none other."

Jim Bradley, director of economic development for the Eufaula Barbour County Chamber of Commerce, said many investment groups had shown interest in the plant over the years since its closing, including from as far away as California.

"Harcal was the only one that met the financial needs," Bradley said. "Other groups wanted a significant investment from either the state or the community. Harcal just purchased the plant outright."

The building was purchased from the Alatech group of Dothan.

To open a new latex plant, Bradley said, would cost about $50 million to begin "from scratch."

"We looked at the opportunities in the state of Alabama and were led to Eufaula by the governor (Robert Bentley) and some other officials," Calhoun said. "My history is in retail, but the governor said the most incentives he had were on the manufacturing side. We found the glove factory and got Steve to come down. We decided to follow through."

Applicants through the Alabama Career Center have come from as far away as Tennessee. There have been about 2,000 apply thus far, and Fylstra said the plant will begin the hiring process soon.

The plant will soon be operating 24 hours per day, seven days per week, according to Fylstra.

A grand opening is planned for around June. The plant will be open to the public for the grand opening with Harvey in attendance to provide "fun stuff," Fylstra said. Harvey will have his television crews on hand to film the event. Fylstra also expects Bentley and possibly other celebrities on hand. The plan is for an invitation-only reception later in the day at Lakepoint State Park.

Davis, who lives in Chicago, is originally from Mobile.

"I actually feel like I've lived here quite a while," Davis said. "Coming to Eufaula feels like home."

Harvey was born in West Virginia but raised in Ohio.

"Steve started out with nothing and created a life," Davis said. "He relates to the homeless person, the person making minimum wage, the person out there working to provide for his family. He'll tell you that God allowed him to go through the process.

"I'm here to make sure the integrity is there and is a testament to our brand."