Authorities said a man killed three people and wounded 14 before being shot dead by an officer at a factory where he worked. 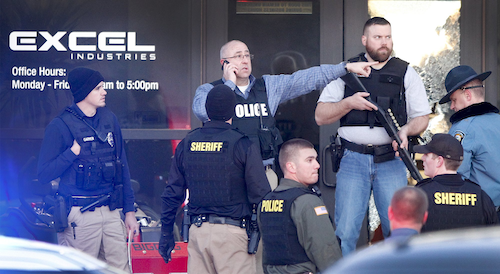 HESSTON, Kan. (AP) — A gunman armed with an "assault-style" weapon drove through a south-central Kansas town Thursday, taking shots at people, before storming the factory where he worked. Authorities said he killed three people and wounded 14 before being shot dead by an officer.

Harvey County Sheriff T. Walton said all the dead were shot inside Excel Industries, a plant in Hesston that makes lawn mower products. He said of those hurt, 10 were critically wounded.

A law enforcement officer killed the gunman after he began shooting at police, Walton said.

Walton would not identify the suspect or discuss a motive but said there were "some things that triggered this individual."

The shootings began about 5 p.m. when the gunman was in a car and shot a man on the street, wounding him in the shoulder. A short time later, another person was shot in the leg at an intersection.

"The shooter proceeded north to Excel Industries in Hesston, where one person was shot in the parking lot before he opened fire inside the building," the department said in a release. "He was seen entering the building with an assault-style long gun." 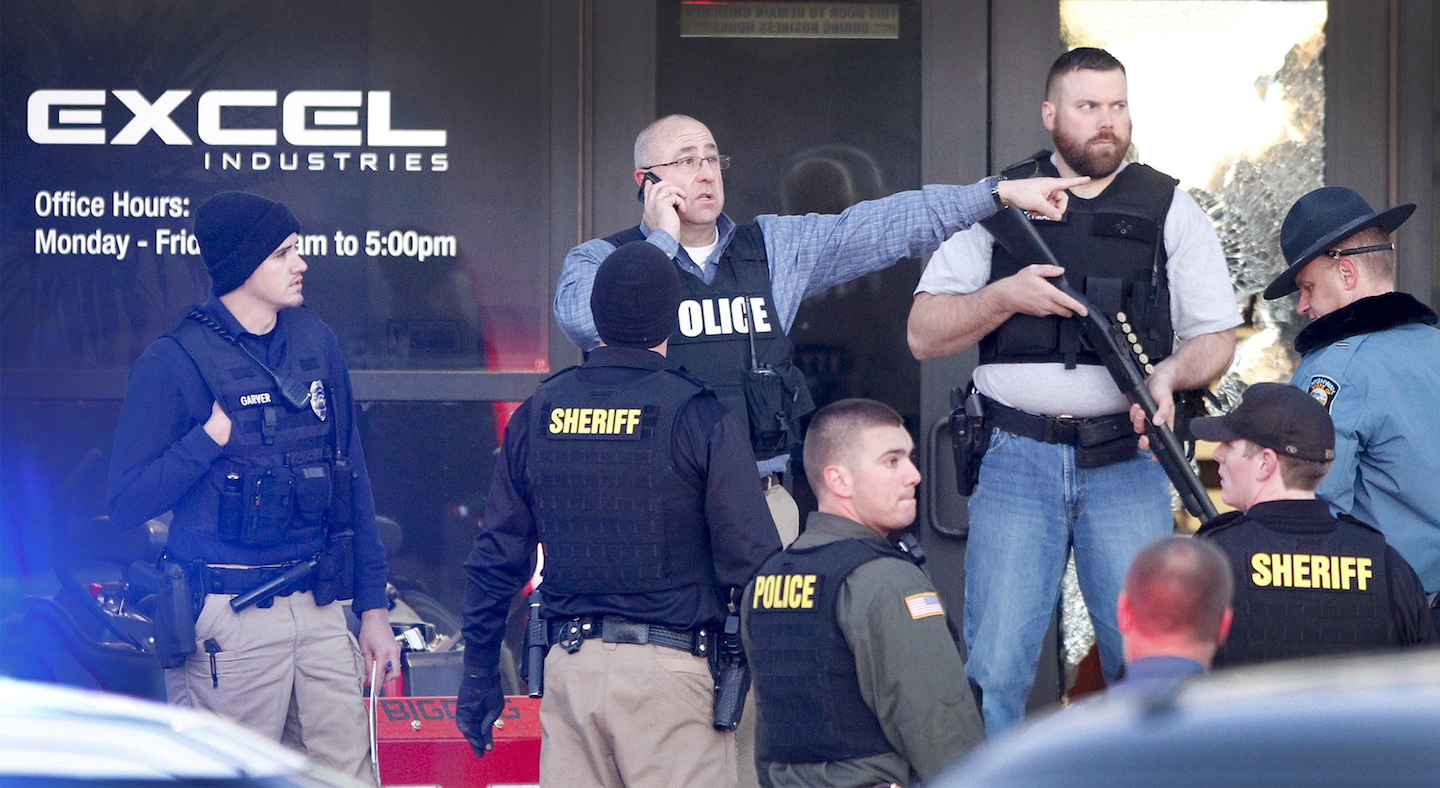 A Hesston officer responding to the scene exchanged fire with the shooter, who was killed. The officer who killed the shooter was not injured.

Walton said about 150 people were likely in the plant at the time of the shooting, and that the law enforcement officer who killed the suspect "saved multiple, multiple lives." He said the gunman also had a pistol.

The officer who killed the man is "a hero as far as I'm concerned," Walton said.

Erin McDaniel, spokeswoman for the nearby city of Newton, said the suspect was known to local authorities. She wouldn't elaborate.

The shooting comes less than a week after authorities say a man opened fire at several locations in the Kalamazoo, Michigan, area leaving six people dead and two severely wounded.

Martin Espinoza, who works at Excel, was in the plant during the shooting. He heard people yelling to others to get out of the building, then heard popping, then saw the shooter, a co-worker he described as typically pretty calm.

Espinoza said the shooter pointed a gun at him and pulled the trigger, but the gun was empty. At that point, the gunman got a different gun and Espinoza ran.

"I took off running. He came outside after a few people, shot outside a few times, shot at the officers coming onto the scene at the moment and then reloaded in front of the company," Espinoza told The Associated Press. "After he reloaded he went inside the lobby in front of the building and that is the last I seen him."

A nearby college was briefly locked down.

Several law enforcement vehicles surrounded the suspect's home in a trailer park in Newton. The Harvey County Sheriff's Department initially said authorities believed the suspect's roommate could be inside. But McDaniel said the standoff ended later Thursday night and no one was inside the home.

Hesston is a community of about 3,700 residents about 35 miles north of Wichita.

Excel Industries was founded in Hesston in 1960. The company manufactures Hustler and Big Dog mowing equipment and was awarded the Governor's Exporter of the Year award in 2013 from the Kansas Department of Commerce.

Gov. Sam Brownback issued a statement late Thursday, calling the shootings "a tragedy that affects every member of the community."

Walton said the FBI and the Kansas Bureau of Investigation had been called in to assist. A spokeswoman for the Kansas City office of the FBI did not immediately return a call seeking comment Thursday night.

"This is just a horrible incident. ... There's going to be a lot of sad people before this is all over," Walton said.

Take a look at the after-the-fact footage from a local ABC news affiliate: