New Hampshire's $1 bacon-scented tickets with a top prize of $1,000 hit the market in early January. Lottery officials went with a conservative print run just in case they were a bust but now expect the tickets to sell out within three months. Sales are far outpacing other $1 scratch tickets, some of which have been for sale for as long as eight months. 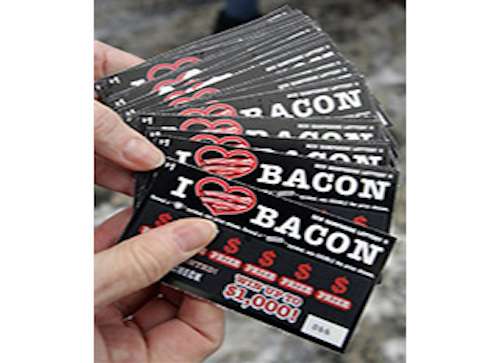 The $1 bacon-scented tickets with a top prize of $1,000 hit the market in early January. Lottery officials went with a conservative print run just in case they were a bust but now expect the tickets to sell out within three months. Sales are far outpacing other $1 scratch tickets, some of which have been for sale for as long as eight months.

New Hampshire isn't the first state to have a bacon-themed lottery ticket, or the first to have a scratch-and-sniff ticket. But it's apparently the first to combine the two.

Colorado lottery officials say their scratch-and-sniff offerings — coffee, chocolate and bouquet — from a few years ago were among their worst sellers, but Rosberg says bacon's pop culture cachet sets it apart.

"You can't get better than bacon. There's gingerbread, there's peppermint, chocolate, coffee — different states have played with different scents but nobody had played with bacon yet," she said. "Everybody likes bacon, and people who don't like bacon are almost afraid to admit it."

The state is promoting the new tickets by bringing The Bacon Truck, a Boston-based food truck, to various locations around the state to hand out free lottery tickets and actual strips of bacon. Those who tried both at a highway rest area Friday came away pleased, whether or not their tickets were winners.

"What's better than free bacon?" said Dale Mottram, 54 of Bedford. He didn't win anything, but said he would buy more tickets in the future.

Lauralee Lamontagne and Joan Farr, two friends from Manchester, made a special trip to Hooksett for the promotion, though both had purchased the tickets in recent weeks. Lamontagne, 48, said she has been sending them to friends.

Farr, 63, said she was skeptical of the scent before she tried it but is now a fan.

"It really smells like bacon," she said. "It was pretty surprising."