Feds to Shut Down Sardine Fishing on West Coast

West Coast fisheries managers will likely shut down sardine fishing this year as numbers decline, echoing a previous collapse that decimated a thriving industry and increasing worries that other species might be withheld from the commercial market. 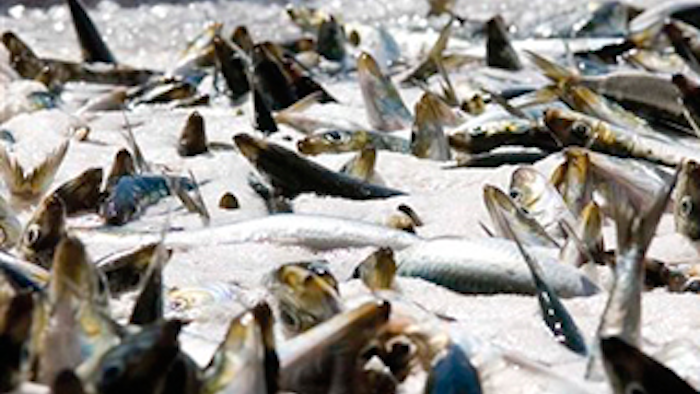 West Coast fisheries managers will likely shut down sardine fishing this year as numbers decline, echoing a previous collapse that decimated a thriving industry and increasing worries that other species might be withheld from the commercial market.

Fishermen are resigned to not being able to get sardines, but they hope the Pacific Fishery Management Council will not be so concerned that it sets the level for incidental catch of sardines at zero, shutting down other fisheries, such as mackerel, anchovies and market squid, which often swim with sardines.

Sardines were a thriving fishery on the West Coast from World War I through World War II, and the cannery-lined waterfront in Monterey, California, became the backdrop for John Steinbeck's 1945 novel, "Cannery Row." The fishery industry crashed in the 1940s, and riding the book's popularity, Cannery Row became a tourist destination, with restaurants and hotels replacing the canneries.

The industry revived in the 1990s, when fisheries developed in Oregon and Washington waters. Today, there are about 100 boats with permits to fish for sardines on the West Coast, about half the number during the heyday. Much of the catch, landed from Mexico to British Columbia, is exported to Asia and Europe, where some is canned, and the rest goes for bait. West Coast landings have risen from a value of $1.4 million in 1991 to a peak of $21 million in 2012, but are again declining.

"The industry survives fishing on a complex," of species, said Diane Pleschner-Steele, director of the California Wetfish Producers Association, which represents 63 California-based fishing boats. "Sardines, up until this point, have been one very important leg of a three- or four-legged stool.... Now we don't have sardines. Our fleet is scrambling."

The latest estimates of how many Pacific sardines are schooling off Oregon, California and Washington have fallen below the mandatory cutoff line. The council cut harvests by two-thirds last year, and meets April 12 in Rohnert Park, California, to set the latest sardine harvest.

The conservation group Oceana is urging the council to immediately shut down sardine fishing, and not wait until the new season starts July 1. The group wants incidental catch limits set at zero, leaving as much food as possible in the ocean for sea lions and other wildlife, and speeding the rebuilding process for sardines.

Ben Enticknap of Oceana acknowledged that sardines naturally go through large population swings, but he argued that fishing since 2007 has exceeded their reproduction rate, exacerbating the numbers collapse.

"Previous stock assessments were way too optimistic and weren't matching up with what was observed on the water," Enticknap said. "The sea lions and sea birds have been starving since 2013, pelicans since 2010. Everyone knew something was going on because there wasn't enough food to eat for these predators. Now this stock assessment comes out saying that the sardine population is much lower than they had previously expected."

David Crabbe, a squid fishing boat owner and council member, said he would expect the council to allow incidental catch to reduce the impact on the fleet.

Fishermen are unhappy with the stock assessments, Pleschner-Steele said. They say the acoustic gear is too deep in the water and misses fish on the surface, where they feed.