Kansas Cropland Values Down This Year Amid Low Grain Prices

Low grain prices are driving down Kansas cropland values this year, while high prices for cattle are pushing up the value of pastures. 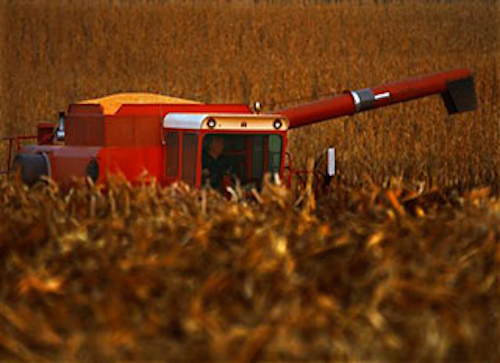 WICHITA, Kan. (AP) — Low grain prices are driving down Kansas cropland values this year, while high prices for cattle are pushing up the value of pastures.

The value of Kansas cropland as of August slipped to an average $2,210 per acre, which was down 2.2 percent compared to last year, according to Agriculture Department survey data. But the average value of Kansas pasture land rose nearly 7 percent, to $1,390 per acre.

Kansas State University agricultural economist Mykel Taylor researched property valuation records of actual sales transactions and found that they tended to be higher than those reported on government surveys, although general trends are the same. Taylor said Tuesday that her estimate is more reflective of the actual real estate market as it is happening, rather than a survey that asks landowners for their opinion of what their land may be worth.

The most recent available survey from the National Agricultural Statistics Service that was released in August was based on a survey conducted in June of agricultural producers nationwide, and the results are statistically weighted to the state level based on the amount of cropland and pasture in each state.

The K-state study included factors such as location, rainfall and taxes. Taylor also looked at how enrollment in the Conservation Reserve Program affected values, and analyzed the data as to whether the land is irrigated, dryland or pasture.

Based on sales transactions, overall agricultural land in Kansas last year was worth $3,320 per acre. Non-irrigated cropland was $2,990 and irrigated land was valued at $5,169, the university said in a news release. Pasture land was selling at $1,802 an acre.

Location was also a factor, with irrigated cropland in south-central Kansas worth more than similar land in western counties where it rains less.

Non-irrigated land values ranged from an average high of $5,133 per acre in northeast Kansas to an average low of $1,472 per acre in the semi-arid southwest Kansas, the university said.

So far, Taylor said she has not seen a sell-off of agricultural land despite the low crop prices. She has noticed some instances of owners putting farmland up for sale and then taking it off the market when they cannot get a buyer at the price they want. The good income farmers made from their land from 2007 through 2013 has provided a buffer for many to get through the low prices they are now getting for their crops, she said.

"If prices stay low for two or three more years, then you will see sell-offs that will occur because people will have no choice," she said.