Police in China have arrested more than 110 people on suspicion of selling pork from diseased pigs in the country's latest food safety scandal. More than 1,000 tons of contaminated pork and 48 tons of cooking oil produced from the meat have been seized in the operation. 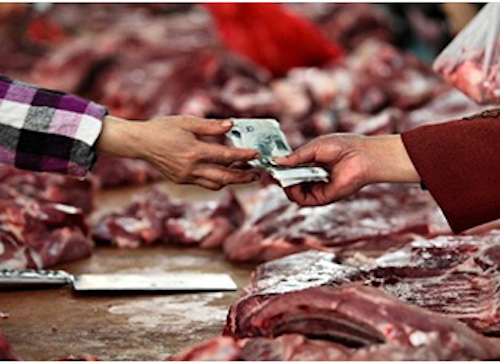 BEIJING (AP) — Police in China have arrested more than 110 people on suspicion of selling pork from diseased pigs in the country's latest food safety scandal.

More than 1,000 tons of contaminated pork and 48 tons of cooking oil produced from the meat have been seized in the operation that began last year across 11 provinces, the Public Security Ministry said in a statement Monday.

The suspects belonged to 11 different syndicates who purchased pigs that died of disease from farmers at cut-rate prices then illegally processed them into bacon, ham and oil, the statement said.

Producers obtained the pigs by bribing government livestock insurance agents, several of whom were also sent for prosecution, it said. The agents informed the syndicates when insurance claims were filed, allowing them to swoop in and buy the pigs as soon as the deaths had been verified, it said.

The statement put the value of seized pork and oil at more than 100 million yuan ($16 million). It did not give a precise figure for arrests, but said 75 suspects had already been sent for prosecution.

Public trust in food safety has been deeply undermined in China by a series of scandals, ranging from bogus baby formula to the widespread sale of "gutter oil" processed from garbage and scraps and sold to restaurants for cooking.