Days after a foodborne illness was linked to Blue Bell ice cream products, a state inspection of an Oklahoma plant later tied to the infection praised the facility for having no violations and doing a "great job," according to a copy of the inspection report. 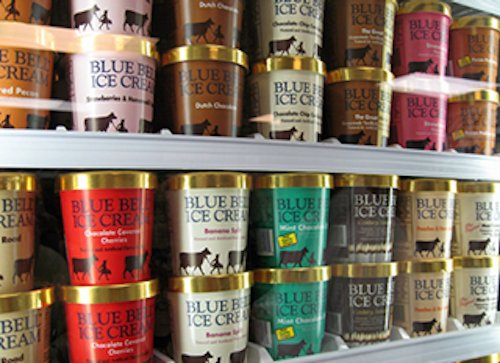 DALLAS (AP) — Days after a foodborne illness was linked to Blue Bell ice cream products, a state inspection of an Oklahoma plant later tied to the infection praised the facility for having no violations and doing a "great job," according to a copy of the inspection report.

Inspectors had no reason to check for listeria during the routine March 18 review as no problems were detected and the facility didn't have a history of issues linked to the illness, said Stan Stromberg, director of the food safety division for the Oklahoma Department of Agriculture, Food and Forestry..

"With an organism like listeria, you cannot do a visual inspection," Stromberg said on Thursday.

Tainted Blue Bell ice cream products have sickened eight people — five in Kansas and three in Texas. Three of the five in Kansas have died and health officials there say listeria, also known as listeriosis, might have been a contributing factor in the deaths.

In the one-page report about the Oklahoma plant, provided to The Associated Press in response to an open records request, an inspector wrote "No Violations Observed!" and "Keep it up!"

At the time of the inspection, listeria had only been traced to Blue Bell's Brenham facility. Blue Bell issued its first recall on March 13.

Stromberg said Oklahoma officials didn't learn until March 22 that listeria was connected to a product produced by the Oklahoma plant.

Stromberg said his agency has been at the plant ever since, working with the Food and Drug Administration and other agencies to determine a cause of the listeria.

"Once you identify where it is, listeria is relatively easy to control. But it's going to be like looking for a needle in a haystack," he said.

Officials in Washington can attest to the difficulty of tracking down listeria at a plant. At least two people became ill after the listeria was detected in products manufactured by Snoqualmie Gourmet Ice Cream. The company responded by issuing a recall in December. It addressed health safety concerns and was given approval to resume operations a month later.

"You may just be working to keep your plant really, really clean, but you also need to work to keep it in good repair because that organism can slide into a crack on the door, or get into the crack where the wall and floor meet," said Lucy Severs, food safety manager for the Department of Agriculture in Washington.

Stromberg said he didn't believe there was any sort of breakdown in the inspection process in Oklahoma as officials don't normally submit samples for laboratory testing as a part of routine reviews, unless there were problems such as with cleanliness. No such problems were detected in the March 18 inspection, which is one of eight to 10 done each year at the plant.

Before the recall, the facility in Brenham had last been fully inspected in February and the Texas Department of State Health Services had found a couple of minor issues. The Brenham facility is inspected monthly.

"Over the years, Blue Bell has had a good inspection record and very few issues, none leading to any enforcement issue (i.e. penalty)," agency spokeswoman Carrie Williams wrote in an email.

In a statement Thursday, Blue Bell said "the fact that our products may be linked to these events is very distressing to us. We are sorry for this news and we are doing everything possible to determine the cause of the outbreak."

Listeria is a life-threatening infection caused by eating food contaminated with bacteria called Listeria monocytogenes, according to the Centers for Disease Control and Prevention. The disease primarily affects pregnant women and their newborns, older adults, and people with immune systems weakened by cancer, cancer treatments, or other serious conditions.

The CDC said Thursday preliminary tests indicate another three people hospitalized at some point from 2010 to 2012 appear to have a similar strain of listeria as the others, but further testing is necessary before confirming a connection.