No. 1 Egg-Producing State Aims to Keep Bird Flu Out

The discovery of bird flu on an Iowa turkey farm has raised serious concerns that the poultry-killing virus could find its way into chicken barns in the nation's top egg-producing state and rapidly decimate flocks that provide the U.S. with its breakfast staple. 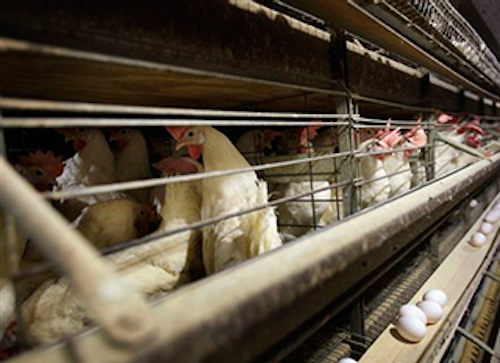 DES MOINES, Iowa (AP) — The discovery of bird flu on an Iowa turkey farm has raised serious concerns that the poultry-killing virus could find its way into chicken barns in the nation's top egg-producing state and rapidly decimate flocks that provide the U.S. with its breakfast staple.

Iowa is home to roughly 50 million hens that lay nearly one in every five eggs consumed in the country. The highly contagious H5N2 virus has not yet been detected in Iowa chicken barns, but it was confirmed Tuesday on a turkey farm in northwest Iowa — marking the first occurrence in the state of the virus, which has forced farmers to kill more than 2.4 million turkeys and chickens in several Midwestern states since March.

"My worst fear at the moment is the virus gets into the commercial egg-laying chicken flocks because that would destroy that particular industry here," said Kyoungjin Yoon, professor of veterinary diagnostic and production animal medicine at Iowa State University.

Iowa sales of eggs and egg products exceed $2 billion a year. So far, just one commercial egg-laying chicken farm — a 200,000-bird facility in Wisconsin — has confirmed the virus.

It's unclear how the virus gets into the largely enclosed poultry barns, but experts believe the droppings of migratory birds carrying the virus are tracked into barns by workers, equipment or rodents, or in other ways. Once inside, the virus quickly sweeps through a flock.

Turkeys appear to be especially susceptible, though experts have long said all poultry is at risk. No humans have become ill from the virus and there is no food safety risk.

"Obviously we're under a heightened alert," said Randy Olson, executive director of the Iowa Poultry Association. "This is the same type of stuff they've been dealing with in Minnesota for a few weeks now. We're trying to learn from them and make sure we continue best practices here."

Minnesota — the country's top turkey producing state — has killed more than 1.7 million turkeys since the virus was first detected there in early March. The H5N2 virus has since shown up on commercial turkey farms in Arkansas, Iowa, Missouri, North Dakota, South Dakota and Wisconsin.

To fight the virus' spread, the current approach is to quarantine infected farms, destroy all the property's birds, thoroughly disinfect the barns and leave the farm idle for months to ensure the virus is gone.

In Iowa, several steps have been taken to protect the facilities. Barn ventilation systems and openings are designed to keep wild birds out, and workers must dip boots in disinfectant before entering barns. Vehicles' tires and floor mats must be disinfected upon entering and leaving farms, and workers must keep their vehicles' windows rolled up, because flies can carry the virus and get into vehicles.

Those steps and numerous others are detailed in a 30-page manual developed for poultry producers by Iowa State Veterinarian David Schmitt. Most were developed to protect against salmonella in eggs in 2011.

"It caused the industry to upgrade biosecurity, and I believe inadvertently their salmonella rule has helped with protection of the egg industry against viral diseases like avian influenza," said Simon Shane, a poultry industry consultant and adjunct professor of poultry science and veterinary medicine at North Carolina State University.

"They need to be concerned but nobody needs to get panicked," Shane said. "I do not believe we will have a wholesale mass uncontrollable outbreak of influenza."

Bird flu vaccines have been used in other countries, but the U.S. government has no plans yet to widely vaccinate flocks, choosing instead to focus on biosecurity measures to keep the virus out of barns. However, vaccines are under development and in testing.

The U.S. Food and Drug Administration said infected hens usually stop laying eggs. The few eggs that are laid generally wouldn't get through washing and grading because their shells are weak and misshapen, making it unlikely contaminated eggs would get to market. Also, properly cooking poultry meat and eggs would kill the virus if present, according to the FDA.

Iowa's egg layers are spread out on 3,800 farms. But just 40 farms have 100,000 chickens or more, meaning the virus showing up at one of them could result in significant loss.

Yoon, the Iowa State professor, said it appears states in the upper Midwest have been more vulnerable because they stay colder and drier longer, conditions favorable for the virus.

New cases should drop to near zero once the weather warms up and kills off the virus, but it's likely to return when this fall's migration begins, according to U.S. Department of Agriculture Chief Veterinary Officer John Clifford.