The plan has sent waves through Maine's scallop industry, where harvesters wonder what the proposed restrictions would mean for catch and dealers speculate what impact they would have on the price for consumers. Recently, prices at some Maine markets have surged close to $20 per pound, while other scallops are closer to $12. 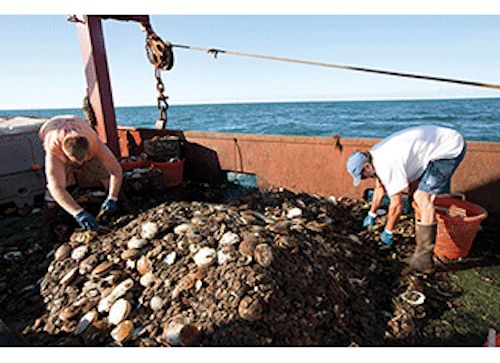 PORTLAND, Maine (AP) — A state legislator wants to put a cap on the amount of Maine scallops that fisherman can harvest, even as the rebounding fishery is growing in volume and value a decade after crashing.

The state's meaty scallops — harvested by drag boats or fishermen who dive for them in frigid waters — are prized in the culinary world and often fetch several dollars more per pound at market than others.

The fishery is experiencing a dramatic comeback: The catch bottomed out in 2005 at 33,141 pounds and rebuilt to more than a half-million pounds in 2014, and regulators say early signs are positive for 2015. And the scallops' price at the dock has more than tripled since 2004 to nearly $13 per pound.

Rep. Robert Alley, D-Beals, has proposed legislation that would create a 90-pound per day, per person limit on wild caught scallops. It also would reduce the maximum width of scallop drags from 10 feet 6 inches to 5 feet 6 inches for most of the state.

The plan has sent waves through Maine's scallop industry, where harvesters wonder what the proposed restrictions would mean for catch and dealers speculate what impact they would have on the price for consumers. Recently, prices at some Maine markets have surged close to $20 per pound, while other scallops are closer to $12.

"Ninety pounds is not really enough to justify going," said Jimmy Wotton, a Friendship-based fisherman who said less restrictive harvest levels already have motivated him to focus more on lobsters. "With the size of my boat and the amount of fuel I need, it's not worth it."

The proposed harvest limits, if approved, would change the way scallops are regulated in Maine, where the state marine resources commissioner typically draws parameters like catch limits before the start of the season. This season, which began in December and will end as late as April 11, Maine's southern two scalloping zones are subject to a limit of about 135 pounds per day. The northernmost zone, which includes scallop-rich Cobscook Bay, has a limit of about 90 pounds.

Alley's proposal is the subject of a public hearing in Augusta scheduled for April 1. State Department of Marine Resources Commissioner Patrick Keliher is studying the proposal and will testify at the hearing on the department's position, a spokesman said.

The new restrictions could be helpful because more fishermen have entered the resurgent fishery, said Dana Temple, a Cape Elizabeth scallop dealer and a member of the Marine Resources Department's scallop advisory council. The number of harvesters in the fishery has more than doubled to more than 400 since 2008, officials have said.

"It's not just the amount of scallops a guy can catch, it's the number of guys catching them," Temple said.

The proposal comes on the heels of encouraging signs for the fishery, state marine resource management coordinator Trisha Cheney said. Fishermen harvested at least 215,000 pounds of scallops in December 2014, nearly 30,000 pounds more than the previous December, she said.

"Overall, demand is outstripping supply in the federal fishery," Cheney said. "A lot of our product is being shipped out of state."

State regulators have said the fishery's recent success is due to new management methods, including a rotational management system in which localized areas in one zone are closed to fishing on a year-to-year basis.