A California company that makes an eggless mayonnaise alternative has the U.S. egg industry scrambling. The American Egg Board, which is responsible for the "Incredible, Edible Egg" slogan, waged a campaign to counter the emergence of Hampton Creek's Just Mayo spread, and even tried to prevent its sale at Whole Foods grocery stores, according to documents provided to The Associated Press. 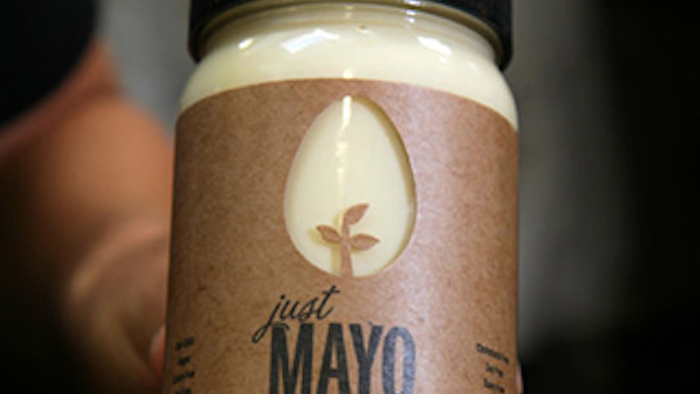 The American Egg Board, which is responsible for the "Incredible, Edible Egg" slogan, waged a campaign to counter the emergence of Hampton Creek's Just Mayo spread, and even tried to prevent its sale at Whole Foods grocery stores, according to documents provided to The Associated Press.

The documents offer a sometimes comic glimpse into the alarm the egg group felt about the startup and its CEO, Josh Tetrick, who has said he wants to make the food system more environmentally friendly by replacing the eggs in an array of foods with plant-based alternatives.

"You want me to contact some of my old buddies in Brooklyn to pay Mr. Tetrick a visit?" one egg board executive wrote to another, presumably in jest.

Publicly, the American Egg Board has sought to downplay Hampton Creek as just another egg substitute and has avoided referring to it by name. But emails showed the board was troubled by the media attention being showered on Hampton Creek, which counts Microsoft co-founder Bill Gates as an indirect investor through Khosla Ventures.

At one point, the egg board commissioned a public relations campaign called "Beyond Eggs Outreach" — a reference to Hampton Creek's previous name. The effort spanned three months and included paying bloggers to tout the benefits of real eggs.

Even lighthearted provocations seemed to cause consternation.

In late 2013, a representative for the PR firm Edelman alerted board executives that Hampton Creek had "just engaged with us directly on Twitter" to challenge it to a bakeoff. The representative advised the board to keep close tabs on reactions to the post — but not to respond.

That was in line with previous advice from an Edelman executive, who compared the situation to a political campaign, where real eggs are the incumbent or "800 lb. gorilla" and Hampton Creek is the insurgent. He said engaging would help legitimize Hampton Creek.

"Can you imagine Hillary Clinton today agreeing to a debate to a little known, left-wing member of her party?" the PR executive wrote.

"In response, we bolstered efforts to increase the demand for eggs and egg products through research, education and promotional activities," Ivy said.

She said such activities are "common within the consumer products industry."

The attempt to stop the sale of Just Mayo at Whole Foods raises regulatory questions, however.

The American Egg Board had revenue of $23.5 million last year and is supposed to promote the $5.5 billion egg category. It is one of several national programs that promote commodities like pork and beef with funding from producers. The programs are overseen by the U.S. Department of Agriculture, which makes them quasi-governmental bodies.

The USDA did not respond this week as to whether the egg board overstepped its mission by trying to stop the sale of a potential competitor. But Roger McEowen, director of the Center for Agricultural Law and Taxation at Iowa State University, said it appears the board went beyond its authority.

"An argument could be made that they're not in the business of preventing other products from being sold," he said.

Meanwhile, Tetrick said Hampton Creek is considering asking for a congressional investigation into possible violations by the board and calling for greater oversight by the USDA.

The emails by egg board executives were obtained through a public records request by Ryan Noah Shapiro, a Freedom of Information Act expert at the Massachusetts Institute of Technology, and his attorney, Jeffrey Light, who specializes in FOIA matters.

Shapiro knows Hampton Creek co-founder Josh Balk and provided the documents to the company, which provided them to The Associated Press.

According to the documents, Ivy emailed consultant Anthony Zolezzi on Dec. 3, 2013 saying she would "like to accept your offer to make that phone call to keep Just Mayo off Whole Foods shelves."

Zolezzi said this week he made the offer because he felt Just Mayo's packaging was misleading. He also thinks eggs are an efficient source of protein and doesn't agree with eliminating them in favor of plant-based alternatives.

He did not recall who he called at Whole Foods, and the company said it was not aware of any such calls.

The documents also indicate Hellmann's mayonnaise maker Unilever reached out to the egg board for support in its lawsuit accusing Hampton Creek of false advertising last year.

Ivy said she advised Unilever to ensure the FDA was aware that Just Mayo does not have eggs, as required by the regulatory standard for mayonnaise.

Unilever, which declined to comment, ended up dropping the suit. But this month, the Food and Drug Administration sent a warning letter to Hampton Creek saying Just Mayo is misbranded because it does not contain eggs.

FDA spokeswoman Jennifer Dooren said the letter was a follow-up to a complaint the agency received, but could not disclose who made it.

Ivan Wasserman, who specializes in food regulatory issues at Manatt, Phelps & Phillips in Washington, D.C., thinks the complaint will be tough for Hampton Creek to dismiss. Mayonnaise is defined as having eggs, and "mayo" is widely considered shorthand for mayonnaise.

"Keeping it exactly how it is with no changes seems like quite an uphill battle," Wasserman said.

Still, Tetrick said he is in talks with the FDA and is confident Just Mayo will keep its name. And despite the egg board's actions, he noted Hampton Creek has continued to attract investors.

"They hired one of the world's leading crisis management firms, Edelman, but I don't think it had any affect at all," he said.