Schreiber Foods will begin construction of a distribution center this month in Richland Center, Wis., to meet the growing demand for yogurt. The dairy giant has spent more than $100 million in the last five years on its two Richland Center yogurt plants. 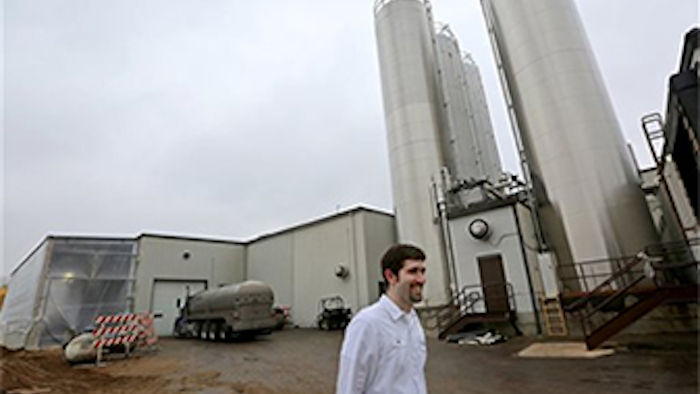 RICHLAND CENTER, Wis. (AP) — Schreiber Foods will begin construction of a distribution center this month in Richland Center, Wis., to meet the growing demand for yogurt.

The dairy giant has spent over $100 million in the last five years on its two Richland Center yogurt plants, which together employ about 400 people.

"If you look at the country, yogurt is growing a lot," said Joe Steinocher, manager of one of the company's two Richland Center yogurt plants. "In the last five years or so, we've spent over $100 million on these two facilities. So we're trying to keep up with it."

The Wisconsin Center for Dairy Research at the University of Wisconsin-Madison says 83 percent of households in the U.S. are buying yogurt and three-quarters of them are repeat customers.

Schreiber Foods is one of the biggest privately held companies in the U.S. with an estimated $4.5 billion in revenue last year, according The State Journal. Schreiber also has a plant in West Bend, which makes cream cheese, and a process cheese plant in Green Bay.

Schreiber Foods was founded in 1945 with a cheese processing plant in a former brewery building in Green Bay. Today, the Green Bay company has 35 plants and distribution centers in eight states and nine international locations, employing more than 6,000 people companywide.

Schreiber Foods supplies store-brand cheese to the grocery industry and is the largest provider of processed cheese to the food-service industry, including restaurants, fast-food chains, schools, universities and hospitals. '

"You don't ever see our name," said Steinocher, who runs the Richland Center West plant. "But you've eaten our product if you eat any type of dairy product. If you eat a cheeseburger somewhere, there's a good chance it's us."

Schreiber Foods plans to break ground in April for a 33,000-square-foot distribution center, to be built as an addition to one of the Richland Center plants with construction expected to be finished by fall. The new center will offer more space to handle increased yogurt production from both Richland Center plants.