MicroZap Inc. claims its technology allows bread to stay mold-free for 60 days. The bread is bombarded with microwaves for about 10 seconds, which kills the mold spores, said chief executive officer Don Stull said. The process could eliminate bakers' need for preservatives and ingredients used to mask preservatives' flavor, as well as reduce food waste and increase bread's shelf life, he said. 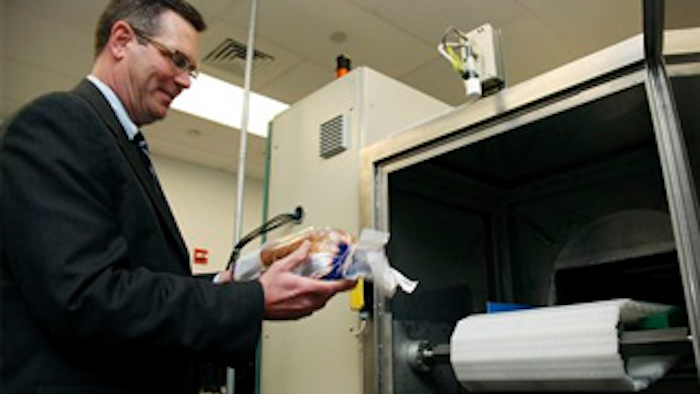 LUBBOCK, Texas (AP) — Attention, bread shoppers: A Texas company could have the answer to some consumers' unwelcome discovery that just-purchased loaves contain mold.

MicroZap Inc. claims its technology allows bread to stay mold-free for 60 days. The bread is bombarded with microwaves for about 10 seconds, which kills the mold spores, chief executive officer Don Stull said.

The process could eliminate bakers' need for preservatives and ingredients used to mask preservatives' flavor, as well as reduce food waste and increase bread's shelf life, he said.

Researchers at Texas Tech University also see using the technology in bread made in developing countries, where there are fewer food safety standards and spoilage is a problem.

"It could help us provide an abundant food source for those in need," said Mindy Brashear, director of the Lubbock university's Center for Food Industry Excellence. The prospect of helping people in developing countries is what motivated the microbiology professor to help develop the technology over the last eight years.

After 60 days, researchers found the treated bread that remained packaged had the same mold content when compared to a freshly baked loaf, Stull said. In the end, though, he knows it comes down to consumers' palates.

"The consumers saw no discernible quality difference in the breads," Stull said of testers who found the treated bread's taste and texture unchanged.

An Associated Press reporter found the same. Though slightly warm from the microwaves, a piece of whole-grain white bread was soft and tasted like one that hadn't been zapped. Sixty-day-old bread was not available to taste.

Estimates from the Natural Resources Defense Council this year indicated that in 2008, in-store food losses in the U.S. totaled an estimated 43 billion pounds — 10 percent of all foods supplied to retail outlets — most of which are perishables, including bread.

Unrefrigerated bread in plastic packaging will succumb to mold in about 10 days, so keeping it at bay for 60 days presents a fresh proposition.

Not so fast, says Ruth MacDonald, professor and chair of food science and human nutrition at Iowa State University. There are thousands of airborne mold spores everywhere, she said, adding that though bread producers might like the technology for storage and transportation, those spores are problematic at home.

Mold is a type of fungus that forms because bread wrapped in plastic packaging still has water inside it. When that trapped water begins to evaporate inside the bag, the bread's surface becomes moist, creating the ideal environment for mold.

Researchers with the university tested the MicroZap on three different mold types on breads inside plastic bags with twist ties, and the microwaves destroyed each one.

But there are characteristics that the zapping won't improve; it won't keep bread from going stale. As for touch, firmness and flavor after 60 days, one scientist had his doubts.

"There would certainly be some questions that I would have around the texture of the bread holding for 60 days," said Brian Strouts, head of experimental baking for the Manhattan, Kan.-based nonprofit American Institute of Baking. "It would not be the answer to all the problems with baked goods. There's a lot of things that can start happening," including bread becoming rancid.

MicroZap is not a commercial bakery and has no plans to package its own bread or operate a plant where bread is treated. For now, its goal is to find a bread manufacturer that wants to implement a pilot program — using a similar metallic device as the testing prototype — in a production line.

A patent is pending on the technology, Stull said, adding that they're in talks with investors. The U.S. Department of Agriculture also has contacted MicroZap about possibly using the technology for exported fruits and vegetables.

Stull said MicroZap has just completed drawings for an in-home unit, so that consumers could treat bread and other foods themselves. He estimated an in-home unit would cost about $100 more than a regular microwave.

Microwaving bread is not the same as irradiation — a technique that kills food pathogens — as no gamma rays are used. The U.S. government has approved irradiation for a variety of foods — meat, spices, certain imported fruits, the seeds used to grow sprouts. It does not make the food radioactive.

The microwaves used in the university lab are the same frequency as commercial units, but delivered in an array that gets a homogenous signal to the bread, eliminating the hot and cold spots common when heating food in kitchen microwaves.

The technology — an effort funded by $1.5 million from Texas' Emerging Technology Fund — was initially intended to kill bacteria such as MRSA, a contagious bacterial infection that's resistant to many commonly used antibiotics, and salmonella. But researchers discovered it also killed mold spores in bread and sterilized fresh or processed foods without cooking or damaging them.

While bread manufacturers have expressed interest in the technology, there's concern it could push up the price in an industry with already tight margins.

"I think the consumers are going to drive this more than companies," Stull said.