Kraft says it plans to remove artificial dyes from three macaroni and cheese varieties that come in kid-friendly shapes, a move that comes as people increasingly reach for foods they feel are natural. The change doesn't affect Kraft's plain elbow-shaped macaroni and cheese with "original flavor." 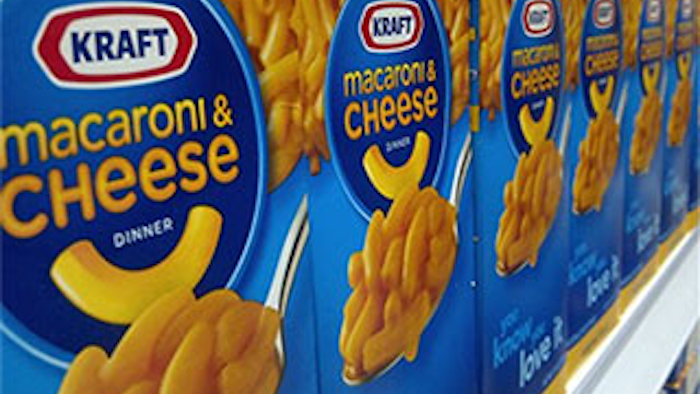 NEW YORK (AP) — Kraft says it plans to remove artificial dyes from three macaroni and cheese varieties that come in kid-friendly shapes, a move that comes as people increasingly reach for foods they feel are natural.

The packaged-food company, which also makes Oscar Mayer and Jell-O, said the revamped recipes aren't a response to a petition on Change.org that asked it to remove artificial dyes from its famous macaroni and cheese kits. That petition, which was posted in March, had more than 348,000 signatures on Thursday.

Kraft's new recipes, which begin shipping early next year, will be for its macaroni and cheese varieties that come in the SpongeBob Squarepants, Halloween and winter shapes. Two new shapes will also be added.

The company said it plans to replace the artificial dyes with spices such as paprika for coloring.

Ingredients in packaged food have come under greater scrutiny in recent years. People are increasingly trying to eat foods they feel are better for them, and big food makers are adjusting their offerings to keep pace.

In the meantime, smaller players such as Annie's Homegrown Inc., which makes a variety of macaroni and cheese, are getting more shelf space at the supermarket.

Earlier this year, PepsiCo also said it would remove a controversial ingredient from its Gatorade sports drink because of customer complaints. The move came after a petition by a Mississippi teenager on Change.org, although PepsiCo said the petition wasn't what prompted its decision.

Triona Schmelter, Kraft Food Group Inc.'s vice president of marketing for meals, said the company was looking to improve the nutritional profiles of the three macaroni and cheese varieties more broadly. The new recipes will also add whole grains and reduce the amount of sodium and saturated fat, she said.

She declined to specify whether Kraft would eventually make similar changes to its other macaroni and cheese lines. But she noted the company already offers options that only use natural colors, such as several of its "Homestyle" varieties.

"We'll continue to make improvement where we can," Schmelter said, noting that the company tries to cater to evolving customer preferences.

Vani Hari, who started the petition on Change.org and runs the website FoodBabe.com, said she expects Kraft will remove artificial dyes from other products down the road.

"I knew all along that it wasn't going to be an overnight change," said Hari, who is based in Charlotte, N.C. "This is a big corporation, and this is one of their biggest products."