Drought is hitting one of the hungriest, most desolate parts of Haiti, the most impoverished nation in the hemisphere. The situation has alarmed the U.N. World Food Program, which sent workers this week to pass out bulgur wheat, cooking oil and salt. 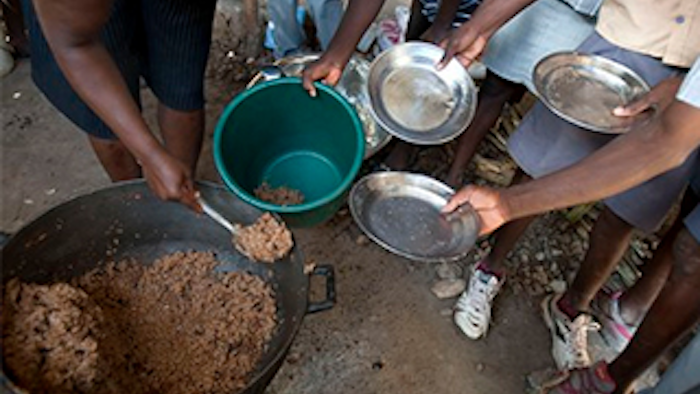 BOMBARDOPOLIS, Haiti (AP) — Jean-Romain Beltinor plunged a hoe into the rocky dirt on his parched hillside to prepare for planting seeds he does not have.

After months of drought in northwest Haiti, the subsistence farmer struggles to find food for his 13 children. To earn a little money, he must turn to work that only makes things worse, cutting what little wood remains for charcoal.

"The rain isn't falling. I can't feed my family," said Beltinor, a taciturn man with a creased face and a hint of orange hair, as he yanked old roots from his small plot of land. "Sometimes you spend a couple of days without food."

Drought is hitting one of the hungriest, most desolate parts of the most impoverished nation in the hemisphere and it has alarmed international aid organizations such as the U.N. World Food Program, which sent workers this week to pass out bulgur wheat, cooking oil and salt.

The agency said it has given food to 164,000 people in the region so far, and the government said it has handed out 6,000 seed kits for farmers.

Officials hope to tide people over through the rainy season that is supposed to begin in April and until harvest in June.

Rainfall for the "Far West" region this year has been just 50 percent of average so far. And it follows sub-par rainfall for 2012 and 2013, according to data produced by the U.S. Geological Survey for the Famine Early Warning Systems Network, which tracks weather, agricultural production and food prices in an effort to avert famine.

"Families are unable to afford things like seeds for the upcoming agricultural season, school fees and medicine," said Chris Hillbruner, a senior adviser for the network. "It also means that they are facing difficulties meeting their basic food needs."

Farmers have had to sell their livestock, to eat the grain needed for planting. Animals not sold are often emaciated, or fall victim to disease.

"I spent the money on school tuition, shoes for my children but it wasn't enough," Jean-Baptiste said from the doorway of her home of tree branches and straw.

Many of Beltinor's children, six of them with Jean-Baptiste, bear the tell-tale signs of malnutrition: Orange and thin hair, bloated bellies, prominent ribs and pencil-thin limbs.

"When they were born they looked like real kids, healthy, but as they've grown up they've started to look unhealthy," Jean-Baptiste said.

Even before the drought began, a government report found chronic malnutrition affecting a quarter of the region's people. Five percent suffered acute malnutrition.

Since then, malnutrition among children has spiked, said Faith Leach, an administrator who has worked at the Evangelical Hospital in Bombardopolis for almost two decades. Eight children were treated for malnutrition from October to December. That number has jumped to 30 since February.

There are no gas stations, few if any paved roads and only a smattering of government offices in the region's coastal towns where houses are made of hay, stone and stick. The only signs of the 21st century are the cellphone towers rising over a sun-seared landscape of dust, rock and cactus.

Bombardopolis, which is near Beltinor's plot, is relatively fortunate in its misery. It sits atop a plateau called "The Platform" that overlooks the Caribbean, and it still has some healthy-looking trees. But the drought puts those too at risk.

Dark smoke from the charcoal pits billows among the hills as poor farmers such as Beltinor cut wood to make one of the few things they can sell. His meager earnings will go toward the purchase of the seeds he hopes to plant.

Charcoal production has helped reduce the country's forest cover to 2 percent of all land and experts say deforestation has impoverished the soil, reduces rainfall and aggravates flooding when the rains do come.

"It's misery that makes us do it," Beltinor said.