An outbreak of bacterial infections on the East Coast illustrates the popularity of raw, unpasteurized milk despite strong warnings from public health officials about the potential danger. Even presidential candidate Ron Paul has joined the cause of consumers looking to buy unprocessed "real foods" straight from the farm, saying government shouldn't deny them that choice. 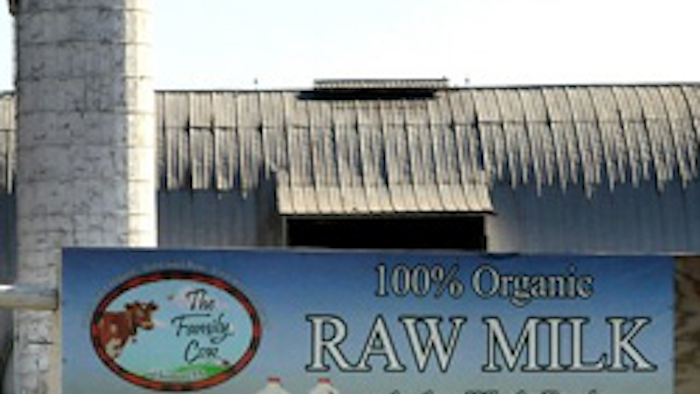 WASHINGTON (AP) — An outbreak of bacterial infections on the East Coast illustrates the popularity of raw, unpasteurized milk despite strong warnings from public health officials about the potential danger.

Even presidential candidate Ron Paul has joined the cause of consumers looking to buy unprocessed "real foods" straight from the farm, saying government shouldn't deny them that choice.

An outbreak of campylobacter illness is a reminder of the potential hazards, however. Raw milk from a dairy in Pennsylvania is now linked to 38 cases in four states, and the farm has temporarily suspended sales. Campylobacter can cause diarrhea, cramping, abdominal pain, and fever and can be life-threatening if it spreads to the bloodstream.

Consumers who want unpasteurized milk have to work to find it. It's against federal law to transport it across state lines, and most states don't allow it to be sold in stores off the farm. Twenty states prohibit raw milk sales altogether.

The government says the milk is unsafe because of the pathogens cows may encounter on the farm. A wide variety of pathogens besides campylobacter, can be found in raw milk — including salmonella, listeria, E. coli and others — and those sickened could suffer from stroke, kidney failure, paralysis or death, according to the Centers for Disease Control and Prevention. The agency points out that raw milk killed many people — especially young children — before the onset of pasteurization, which kills disease-causing germs by heating milk to high temperatures for a specific period of time.

The CDC says pasteurized milk is rich in proteins, carbohydrates and other nutrients, and that heat only slightly decreases thiamine, vitamin B12, and vitamin C.

While the government contends that milk is a minor source of those nutrients, raw milk advocates say that's proof that pasteurization makes milk less wholesome and pure.

The government doesn't keep records of raw milk consumption or sales, but it's clear that the product is popularized by a larger food movement that encourages less processing and more "real food." Raw milk goes a step further than organic milk free of added growth hormones. Organic milk, too, has enjoyed a sales boost in recent years.

"We are pushing for consumer choice and freedom and a variety of dairy options for people," said Kimberly Hartke of the Weston A. Price Foundation, an activist group that advocates "restoring nutrient-dense foods to the human diet." Price was a dentist who studied global nutrition around the turn of the 20th century.

Advocates say far more illnesses are caused each year by leafy greens, deli meats and other products produced in much larger quantities than raw milk.

"To outlaw or ban any natural food because it could possibly make you sick is an extreme position, because there is no safe food," Hartke said.

That's a position that presidential contender Paul, a physician, understands. He appears to have acknowledged the potential risks of raw milk when he said last summer that "what I'm doing in politics is not exactly the medical opinion."

Supporters of raw milk are passionate, and the issue has become one of the most animated food debates. Raw milk consumers and Price foundation representatives have held protests in Washington to fight Food and Drug Administration crackdowns on some farms that sell raw milk.

The fact that there's even a debate infuriates many in the public health community.

"The intensity with which raw milk supporters believe in this product is almost unheard of, certainly for a food," said Sarah Klein, an attorney for the Center for Science in the Public Interest. "It's like snake oil."

"These are still animals; they defecate inches from where the milk is produced," she said. "They stand in it, they swat their tails through it. That's all very natural. It's just a matter of course that raw milk is contaminated."

The owner of the Pennsylvania dairy, Your Family Cow farm in Chambersburg, posted a message on the farm's website last week saying that several customers had called them to say they had been experiencing "acute diarrhea, fever and stomach cramps."

Owner Edwin Shank said in the posting that the farm's testing had shown samples to be negative for campylobacter and speculated that the illnesses may be from another cause. But the Pennsylvania health department has linked the outbreak to the farm, and a spokeswoman for the Maryland's health department says an unopened bottle from the farm tested positive for campylobacter.

Raw milk sales are illegal in Maryland, but the state has four illnesses from the outbreak. Those sickened presumably drove to Pennsylvania and brought the milk back for their own consumption, said Maria Said of the Maryland Department of Health and Mental Hygiene.

One person is also sick in New Jersey and two in West Virginia, according to the Pennsylvania Department of Health. Thirty one people are sick in Pennsylvania, many of them in Franklin County, where the farm is located.

Pennsylvania has had at least seven disease outbreaks linked to raw milk consumption since 2006, involving almost 200 people, according to the health department. Pennsylvania is one of 17 states where some type of raw milk sales are allowed, according to the National Association of State Departments of Agriculture.