Mayor Michael Bloomberg says that if New Yorkers want to kill themselves with sugar — that's their right. That was the mayor's response Monday to a small, peaceful protest rally against a ban on big sodas on a sidewalk near City Hall Park — dubbed The Million Big Gulp March. 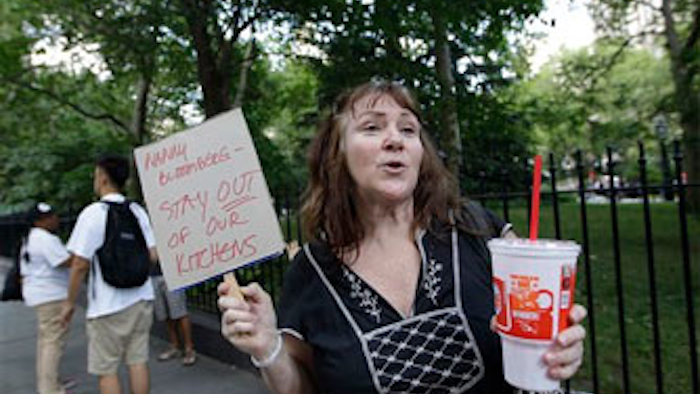 NEW YORK (AP) — Mayor Michael Bloomberg says that if New Yorkers want to kill themselves with sugar — that's their right.

That was the mayor's response Monday to a small, peaceful protest rally against a ban on big sodas on a sidewalk near City Hall Park — dubbed The Million Big Gulp March.

Bloomberg has proposed a crackdown on super-sized drinks. He wants to stop bar restaurants, movie theaters, sports arenas, food carts and delis from selling sodas and other sugary drinks in servings larger than 16 ounces. He says it's a way to fight obesity in a city that spends billions of dollars a year on weight-related health problems.

"If you want to kill yourself, I guess you have the right to do it. We're trying to do something about it," Bloomberg said earlier Monday, when asked about the planned rally, which eventually drew dozens of protesters.

Opponents say the city is overstepping its authority and infringing on personal freedom.

"Hands off my Bladder" read a sign hoisted by Dominic Inferrera, a singer and actor in his 30s.

"For a ban as ridiculous as this one, we need a protest with some humor," said Inferrera, holding a Double Gulp cup he said was half filled with Powerade, half with Sprite.

For some, the issue was far from funny.

City Council Member Dan Halloran, a Republican from Queens, said Bloomberg's stance on soda size challenged nothing less than "the principles on which our country was founded."

Halloran, who is running for Congress, was flanked by two female campaign staffers encircled by mammoth paper cubs that said "157 oz" — a nonexistent soda size way above the typical 16- or 20-ounce containers that fall under the ban.

"This is not the way a democracy works," he said. "When do we say enough control is enough? It's a slippery slope. It's not how our country was founded."

He cited the mayor's previous legislation linked to calories and cigarettes.

David Krakauer, a 16-year-old New York native who lives in Israel, said there's no such soda ban in Israel. "Every person has the right to decide how much soda he can drink — not the government."

The rally was led by the NYC Liberty HQ grass-roots group.