Drakes Bay Oyster Co. is considering several options to keep the oyster farm operating after the U.S. Supreme Court refused to consider its appeal to stay open. Federal officials want to return the oysters to the waters of Drakes Estero in Northern California. 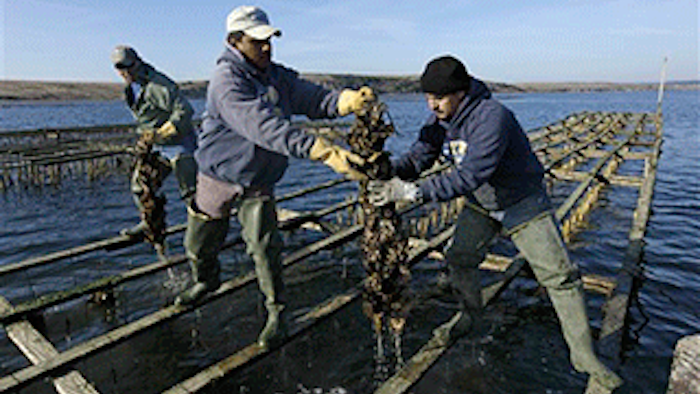 SAN FRANCISCO (AP) — The U.S. Supreme Court refused Monday to consider the appeal of a popular oyster farm that federal officials want to shutter and return to wilderness along the coast of Northern California.

The owners said later at a news conference in San Francisco that they would keep fighting to stay in business.

"It's not over until the last oyster is shucked," Kevin Lunny said.

Lunny said he and his lawyers are considering several options but didn't specify their next step to keep the oyster farm operating and its workers on the job along Point Reyes National Seashore, north of San Francisco.

Lunny said pursuing a legislative solution is one option because Congress could override the Department of Interior and issue the farm a permit.

Lower courts have allowed the farm to keep operating through the appeals process.

The case began in 2007 when the Department of Interior made it clear it would not renew the oyster farm's 40-year lease when it expired in 2012. The agency cited a 1976 Congressional decision to return the waters of Drakes Estero to wilderness status.

The department also cited research critical of the operation's effects on harbor seals, which use the estuary to reproduce.

Scrutiny of the research, however, unearthed errors and omissions that critics say showed park officials had an agenda to get rid of the oyster farm.

Lunny bought the oyster company in 2004, figuring he and his lawyers could negotiate a long-term lease extension.

Lunny, whose family has owned a cattle ranch overlooking the estuary since 1947, said his case is important to a dozen other families with cattle ranches within the national park who have not had their government leases renewed.

"We feel this is absolutely important fight to continue," Lunny said in his lawyer's office after the high court ruling. "Thirty workers stand to lose their jobs and this effects the ranchers within the Point Reyes Seashore."

Jessica Kershaw, a Department of Interior spokeswoman, didn't return phone and email inquiries about its plans to close the oyster farm.

Lunny's lawyer Peter Prows said he intends to speak with federal officials soon to determine the next steps.

"At the moment, the farm is open," Prows said.

The farm previously enlisted the support of U.S. Sen. Dianne Feinstein. When park service lawyers determined the agency did not have legal grounds to issue a new permit, Feinstein authored 2009 legislation allowing the Interior secretary to issue 10-year permits. Nonetheless, the department declined to issue a permit to the oyster farm.

Lunny said he had spoken Monday with Feinstein's office. The office didn't return a call from The Associated Press seeking comment.