Moonshine distillers are making their first batches of legal liquor in this tiny Georgia town's city hall, not far from the mountains and the maroon, orange and gold canopy of trees that once hid bootleggers from the law. A handful of moonshine distilleries are scattered around the South, but observers say this is the first they've ever seen right in a city hall. 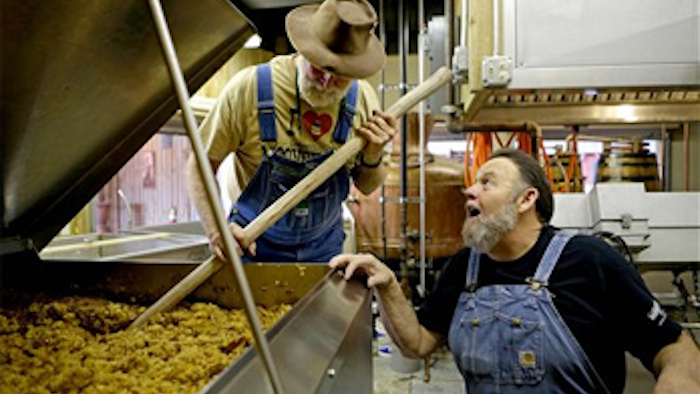 DAWSONVILLE, Ga. (AP) — Moonshine distillers are making their first batches of legal liquor in this tiny Georgia town's city hall, not far from the mountains and the maroon, orange and gold canopy of trees that once hid bootleggers from the law.

A handful of moonshine distilleries are scattered around the South, but observers say this is the first they've ever seen right in a city hall. The distilleries come amid an increased interest in the U.S. for locally made specialty spirits and beer brewed in homes and micro-breweries.

The Dawsonville moonshine makers and city officials say the operation helps preserve a way of life. It also carries on traditions of an era when moonshine meant extra income for farmers, medicine for their children and helped fuel the beginnings of NASCAR racing.

"Dawson County was, sure enough, the moonshine capital of the world at one time," distiller Dwight Bearden said, as he checked on the still where the third batch of Dawsonville Moonshine was being prepared. "It was just a way of life back then."

The clanking of the still and the smell of corn and alcohol fill the room several yards and a few interior walls away from the offices of the city clerk, the mayor and other officials running the town about 60 miles north of Atlanta. The city leases the space to the distillery.

Outside city hall are old, abandoned cars from the days when Ford Coupes and other models from the 1930s and '40s hauled moonshine down Georgia Highway 9. The windy mountain highway became known as Thunder Road, because it was filled with the screaming sounds of car engines as bootleggers hauled their moonshine to Atlanta.

The young drivers were sometimes pursued by "revenue men" from the federal government, and the chases sometimes led to overturned cars and deadly wrecks. Townspeople are proud of how young Dawsonville men raced their cars at places like Lakewood Speedway in Atlanta after moonshine deliveries, which helped stock-car racing gain a following in its early days.

Inside the distillery are plenty of reminders of the days when moonshine was made in the surrounding foothills.

Entrepreneur Cheryl "Happy" Wood points with pride to a portrait of her grandfather, Simmie Free, hanging on one wall.

"Mama said, 'When you get this going, I want you to hang this up," Wood said.

"We grew up around it, and it was our medicine," Wood said. Cough medicine was among its medicinal uses, she said.

Bearden, 56, recalls how extra income from his family's moonshining helped feed him as a child, and often meant a better Christmas if sales were good.

There are a handful of other moonshine distilleries in Southern states such as North Carolina, but officials from state and national groups say they aren't aware of any operating in a city hall.

"That's a new one for me," said Gregory Minchak, a spokesman for the National League of Cities.

J. Katie McConnell, senior associate for economic development at the League of Cities, has been studying the craft beer industry in recent months, and how small breweries and distilleries have sprung up and expanded in many communities. In Washington, D.C., for instance, the city's first gin distillery in more than a century opened this year, she said.

Wood has been planning the distillery for about five years. As she searched for a site, she and city officials began to realize that city hall would be an ideal spot, Dawsonville Mayor W. James Grogan said. The idea was that the distillery would tie into the city's history since it would be right next-door to the Georgia Racing Hall of Fame Museum, Grogan said.

The distillery has reached several key milestones this year.

Last week, the distillery was delivering the second batch of moonshine it's made to its distributor, which has orders from liquor stores and other businesses around the state. Georgia law prohibits the distillery from selling its liquor at the site, but allows a distributor to ship it to stores with a liquor license, where it can be sold legally.

Wood recently got approval from state officials to offer small samples for tourists to taste.

State Rep. Rusty Kidd of Milledgeville, who introduced that bill during the most recent session, said Thursday he believes there will be more legislation during the upcoming session that would allow the Dawsonville distillery and others in the state to sell a single bottle of moonshine to tourists who want to take one home.

The samples will be offered on a counter made from wood cut by one of the distillery's employees, Bob Suchke of Dahlonega. Tin covering the front of the tasting counter came from an old barn, Wood said.

Locally made and locally grown products are a key aspect of the business, she said. A batch of apples fermenting last week came from the north Georgia town of Ellijay, about 30 miles away, she said.

The local movement has been a successful one in north Georgia, where several vineyards dot the mountain landscape and offer tastings of wines made with locally grown grapes. In Blue Ridge, at least one apple orchard brews and bottles its own apple and peach ciders.

"This ain't sugar liquor," she said, "this is the real deal."