A trifecta of developments has created the critical shortage: aging cabernet vines are due for replacement, demand is rising due to the improving economy and some growers are prepping their vines for mechanization. 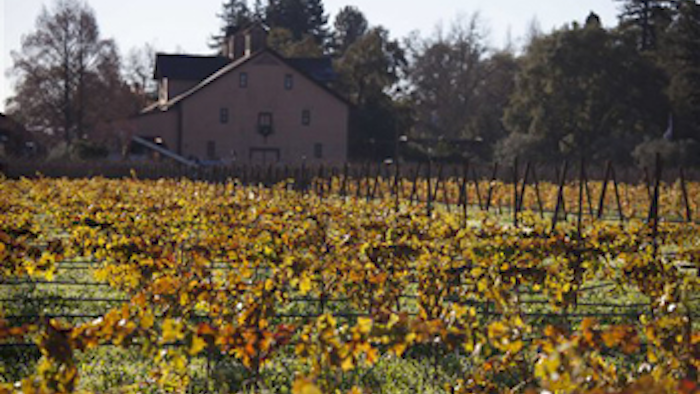 SAN FRANCISCO (AP) — Napa Valley, one of the world's premier wine growing regions, has an uncommon problem these days: not enough new grapevine root stock is available to supply the massive replanting that's under way there.

A trifecta of developments has created the critical shortage:

Aging cabernet vines planted after a deadly phylloxera outbreak in the 1980s are due for replacement that was deferred for years as sales of premium wines slumped in the recession.

With demand again strong, growers are taking the opportunity to replace old vines with varieties and clones better suited for their microclimates. Others are reconfiguring rows to prevent erosion into sensitive streams, or to allow mechanical harvesting machinery to access vines.

All of this activity caught commercial nurseries across California short of supply. Some are sold out for 2013 and are taking orders for 2014 and beyond.

"I've never seen anything like this," said Michael Monette of Sunridge Nurseries, one of the industry's biggest suppliers of plants. "What's totally phenomenal for me is I'm focusing on 2014 and 2015, which is absolutely nutso. We have no more space in our greenhouses."

Napa Valley, an hour's drive northeast of San Francisco, caught the world's attention in 1976 when, to the shock and chagrin of the French, wines from Stag's Leap and Chateau Montelena won the Paris Wine Tasting. The ensuing rush to plant was cut short when the rootstock that most new growers used was not fully resistant to the root-eating phylloxera pest.

Nearly two-thirds of the vines there slowly died, and vineyard owners yanked millions of plants beginning around 1990 then spent $1.2 billion replacing them.

That replanting of new clones on more resistant rootstock are the vines on which the Napa Valley's current reputation for excellence was sealed. Today wines from Napa Valley's 16 sub-appellations are some of the most complex and priciest produced.

After 20 years, however, plants reach old age and yields begin to diminish in a region where a ton of grapes can fetch $4,500 or more.

Growers routinely replace plants, but the convergence of events has created an urgency that prompted the Napa Valley Grapegrowers to gather experts last week to talk about planning, plant financing and even preventing erosion during the process in a region of sensitive habitat.

"The defining feature of this movement is the scale at which it is taking place," said Jennifer Putnam, executive director of the association. "That nurseries are sold out is unprecedented. That an industry is reinvesting in itself right now is a sure sign we're coming out of the recession."

Mondavi alone is in the process of planting 1.5 million new vines, she said. One vineyard management company alone removed 8,000 acres this year.

"A lot has changed since the phylloxera replanting," said Putnam. "We've learned more about the soil, and what varieties might be better suited for a site, maybe the row orientation should change. We're at the beginning of a wave of change."

While grapes can grow by simply planting a cane in the ground, those plants will not be resistant to pests and disease. Nurseries graft European vines onto native North American grape plant roots, which are naturally resistant to phylloxera. Botanists further tweak rootstocks to resist local pests and disease, or to control the vigor of the vines.

"It has been 23 years since 1990, so that's a lot of acreage coming due," said Jon Ruel, chief operating officer at the 480-acre Trefethen Family Vineyard in Napa Valley's Oak Knoll District. "Growers were quiet for a number of years, but now we have a lot more optimism. Now wineries want grapes and growers are like, 'Shoot, I should have planted a few years ago.'"

Trefethen was founded in 1968 when there were just 15 wineries in the Napa Valley. Since the phylloxera replanting, they've learned more about the types of vines suited to the soil and the trellis structure that best supports them. Cabernet sauvignon grapes that ripen in the shade can taste like bell peppers, but those with low vigor and clusters exposed to direct sunlight can develop a raisin-like flavor.

Ruel says changing rootstock, as he is doing, is like rotating crops — you end up with a plant that is more resistant to whatever pests and disease exist in the soil.

"Every time you replant you have the opportunity to do it smarter," said Ruel, who will replace 40 acres a year until his redo is complete. "It's really an exciting time because it's an opportunity to reinvest in our vineyard with a better understanding of how we can produce the best possible grapes and in a sustainable fashion as well."

Most of the new plantings going on across Napa Valley are cabernet sauvignon, the varietal for which the region is most associated, Monette said. But others are planting rising stars petit verdot, malbec and petite sirah for blending.

Beckstoffer Vineyards is looking at new rootstock and clones as cabernet vines are replaced on more than 200 acres. They've placed some orders for 2014 delivery.

"We've been developing for two years when (grape) prices were low because we saw they would come back. We'd rather have fruit available than wait two years for it, even when prices were very low," David Beckstoffer said. "Replanting is expensive, but when prices are where you want them to be your investment pays off."

Over the past two decades the bucolic Napa Valley has transformed itself into a showplace of wineries as celebrities and the rich erect grand palaces to host $25 tastings of estate-grown vintages. Now growers and winemakers who believe that the best wines are made on the vines are eager to see what improvements this new generation of plants will bring.

It's a chance, Putnam said, for Napa Valley to raise the bar again.

"You only get an opportunity like this every 20 years," she said. "There's a very optimistic feeling here. This is a place that's looking ahead and planning ahead."