Smithfield sold Paula Deen-branded hams in addition to using her as a spokeswoman. In a statement, the company said it "condemns the use of offensive and discriminatory language and behavior of any kind. Therefore, we are terminating our partnership with Paula Deen." 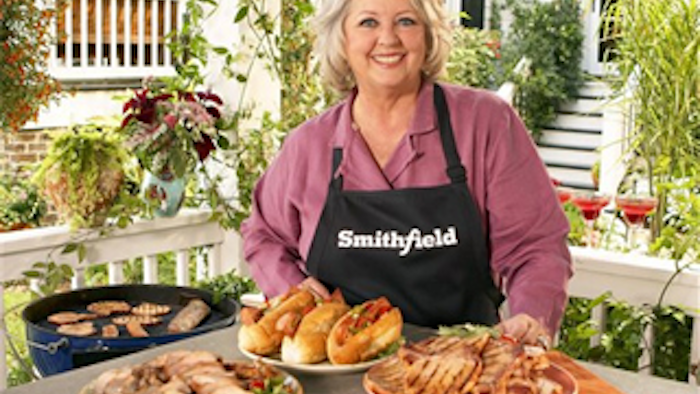 NEW YORK (AP) — Paula Deen lost another part of her empire on Monday: Smithfield Foods said it is dropping her as a spokeswoman.

The announcement came days after the Food Network said it would not renew the celebrity cook's contract in the wake of revelations that she used racial slurs in the past.

Smithfield sold Paula Deen-branded hams in addition to using her as a spokeswoman. In a statement, the company said it "condemns the use of offensive and discriminatory language and behavior of any kind. Therefore, we are terminating our partnership with Paula Deen."

QVC also said it was reviewing its deal with Paula Deen Enterprises to sell the star's cookbooks and cookware.

"QVC shares the concerns being raised around the unfortunate Paula Deen situation," QVC said in a statement. "We are closely monitoring these events and the ongoing litigation. We are reviewing our business relationship with Ms. Deen, and in the meantime, we have no immediate plans to have her appear on QVC."

Sears Holdings Corp. said it "is currently exploring next steps as they pertain to Ms. Deen's products." Target Corp. said it is "evaluating the situation." Meyer Corp., which produces the cookware under the Paula Deen brand, declined to comment.

Marty Brochstein, senior vice president of The Licensing Industry Merchandisers' Association, a trade group, said stores may have a tougher time determining whether to cut ties with Deen than Smithfield and the Food Network, where she has a public role.

"Once you take the wrapper off, her name isn't necessarily on every piece of merchandise," Brochstein said. "As a retailer or as a licensee, you have to evaluate. But you're probably not going to gain anything by overreacting."

Brochstein said that stores are likely closely watching sales of the merchandise and monitoring social media as they gauge how consumers are responding.

"We're in the midst of this. It hasn't played out," he added.

Deen's rapid fall from favor came after the 66-year-old Food Network star admitted in a deposition in a discrimination lawsuit that she used racial slurs in the past. Deen was asked under oath if she had ever used the N-word. "Yes, of course," Deen said, though she added, "It's been a very long time."

Deen insisted she and her family do not tolerate prejudice, and in a videotaped apology, she asked fans and critics for forgiveness. It had been posted online for about an hour when the Food Network released a terse statement that it "will not renew Paula Deen's contract when it expires at the end of this month." The network declined to comment further.

Las Vegas-based Caesars Entertainment Corp., which has Deen's restaurants in some of its casinos, said Friday that it "will continue to monitor the situation." Publisher Ballantine, which has a new Deen book scheduled to roll out this fall, used similar words.