Scientists have uncovered a 3,700-year-old wine cellar in the ruins of a Canaanite palace in Israel, and chemical analysis shows this is where they kept the good stuff. Samples from the ceramic jars suggest they held a luxurious beverage reserved for banquets. 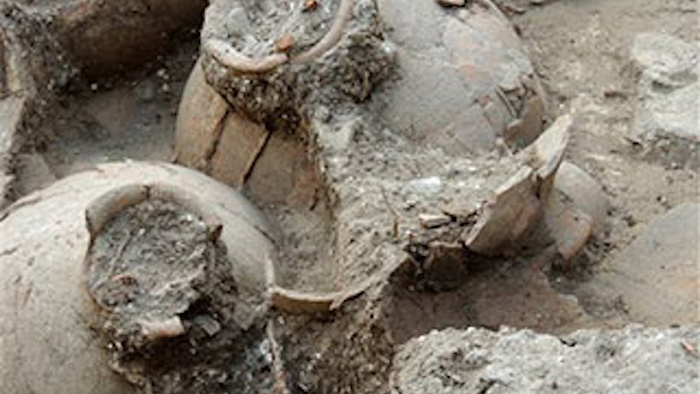 NEW YORK (AP) — Scientists have uncovered a 3,700-year-old wine cellar in the ruins of a Canaanite palace in Israel, and chemical analysis shows this is where they kept the good stuff.

Samples from the ceramic jars suggest they held a luxurious beverage that was evidently reserved for banquets, researchers said.

"It's not wine that somebody is just going to come home from a hard day and kick back and drink," said Andrew Koh of Brandeis University. He found signs of a blend of ingredients that may have included honey, mint, cedar, tree resins and cinnamon bark.

The discovery confirms how sophisticated wines were at that time, something suggested only by ancient texts, said Eric Cline of George Washington University. He, Koh and Assaf Yasur-Landau of the University of Haifa in Israel spoke to reporters Thursday before their work was presented Friday at a meeting of the American Schools of Oriental Research.

The wine cellar was found this summer in palace ruins near the modern town of Nahariya in northern Israel. Researchers found 40 ceramic jars, each big enough to hold about 13 gallons, in a single room. There may be more wine stored elsewhere, but the amount found so far wouldn't be enough to supply the local population, which is why the researchers believe it was reserved for palace use, Cline said.

The unmarked jars are all similar, as if made by the same potter, Yasur-Landau said. Chemical analysis indicates that the jars held red wine and possibly white wine, Koh said. No liquid was left, and he analyzed residues he had removed from the jars.

Patrick McGovern of the University of Pennsylvania, an expert in ancient winemaking, said the discovery "sheds important new light" on the development of winemaking in ancient Canaan, from which it later spread to Egypt and across the Mediterranean. He said the chemical analysis would have to be published before the ingredients of the wine could be assessed.

Curtis Runnels, an archaeologist at Boston University, called the finding significant not only in showing the sophistication of the wine, but also in suggesting that it was meant specifically for palace use. He noted that the chemical analysis showed each jar held wine from the same recipe, showing the "consistency and control you'd expect in a palace."