Officials from California's Drought Task Force Tuesday listened to Central Valley community leaders and farmers vent their frustration over a lack of swift action regarding water and what they perceive to be too much red tape and outdated environmental laws. 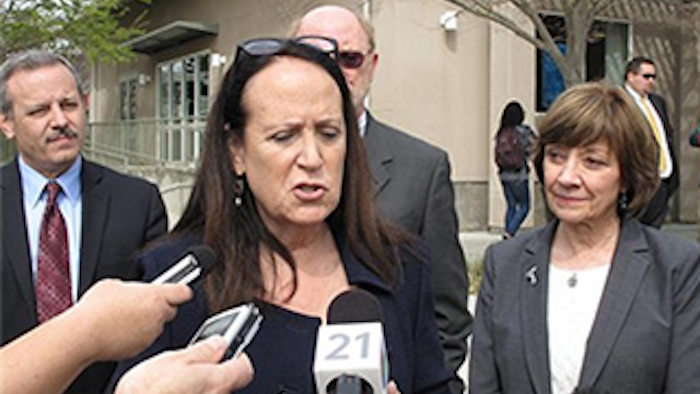 MERCED, Calif. (AP) — Two recent storms that washed over bone-dry California delivered welcome rain and snow, but officials from the state's Drought Task Force said Tuesday that much more is needed to alleviate the crisis.

Secretary John Laird of the California Natural Resources Agency said that the state needs a storm every other day through May to bring California to something resembling a normal year.

"While it helps, we still have a long way to go," he said.

Laird spoke at the University of California, Merced, in a meeting of the California State Board of Food and Agriculture. He represented the Drought Task Force, a body Gov. Jerry Brown formed in December to address the crisis. California is in its third dry year, and in January Brown declared a drought emergency.

The task force includes Secretary Karen Ross of the state's Department of Food and Agriculture and Felicia Marcus, chair of the State Water Resources Control Board. The panel talked about the collaboration of their agencies.

More than talking, Laird and his task force listened to Central Valley community leaders and farmers vent their frustration over a lack of quick action regarding water and what they perceive to be too much bureaucracy and outdated environmental laws.

They wanted more water delivered to their crops. Dan Nelson of the San Luis and Delta Mendota Water Agency said precious water from the recent storms isn't being captured. Even that small amount could save farmers from ruin, he said.

"This is going to be a spike," he said, drawing a roar of applause from the farmers gathered in the room. "As we set up forums to talk about it, water's flowing out into the ocean."

Marcus responded by saying that many different options are being discussed at an agency level.

Task force members are visiting different parts of the state to take input from people directly hurt by the drought. During 52 days in the wet season, no rain fell in Sacramento or Redding, signaling a clear problem, he said.

Task force members said they will take what they heard from farmers and use that to inform their decisions in Sacramento. Laird said afterward that he understood the frustrations he heard.

"I think I would feel exactly the same," he said. "It's a motivator for us to gather disparate forces."