Bill Yosses, the executive pastry chef for the White House, said he will be leaving in June after more than seven years of dessert-making. He plans to move to New York to teach about healthy eating, and join his husband, Charlie Jandusay Fabella Jr., also a teacher. 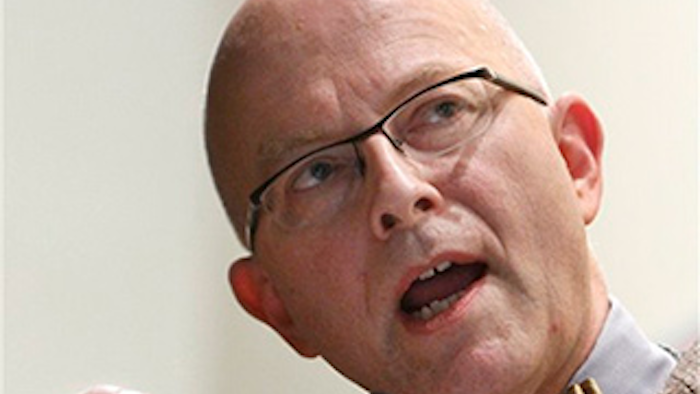 The executive pastry chef has given notice that he's leaving the White House in June after more than seven years of dessert-making. He plans to move to New York to teach about eating healthier, and join his husband, Charlie Jandusay Fabella Jr., also a teacher.

The couple wed in Washington in 2011, but have lived apart for the 11 years they have known each other, Yosses said.

Yosses, 60, joined the White House in January 2007 after he was hired by then-first lady Laura Bush. His departure leaves the current first lady, Michelle Obama, with a big personnel decision to make in the coming months.

Yosses has said he was dubbed "The Crust Master" by President Barack Obama, who had a weakness for just about any fruit pie the chef turned out. Last Thanksgiving, for example, the Obama family and guests had their choice of six varieties of Yosses' pies — huckleberry, pecan, chocolate cream, sweet potato, banana cream or coconut cream.

Yosses said Mrs. Obama, who leads a nationwide effort to reduce childhood obesity, stoked his interest in the link between food and health. After she became first lady in 2009, his instructions were to make smaller, more healthful desserts.

Mrs. Obama has said dessert for her family is reserved for the weekends.

He also began using berries and herbs from Mrs. Obama's garden on the South Lawn, and honey from the White House beehive in place of refined sugar in his pastries.

Mrs. Obama said she was "incredibly sad" over Yosses' planned departure, and wished the best for him and his husband.

"I am also so grateful to him for his outstanding work, not just as the White House pastry chef producing the most delectable creations for everything from birthday celebrations to state visits, but also as a key partner helping us get the White House Kitchen Garden off the ground and building a healthier future for our next generation," she said in a statement.

The New York Times first reported on Yosses' departure on its website Tuesday.