McDonald’s Pulls Out of Crimea

McDonald's has closed its three restaurants in Crimea as it evaluates the "evolving situation" on the Black Sea peninsula. The chain said Friday that the closures were "strictly a business decision which has nothing to do with politics." 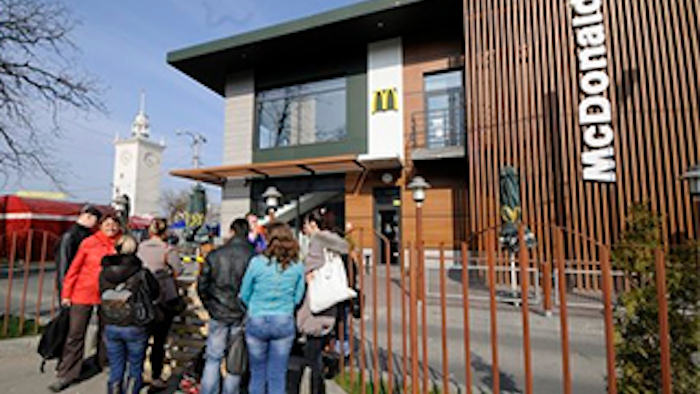 NEW YORK (AP) — McDonald's has closed its three restaurants in Crimea as it evaluates the "evolving situation" on the Black Sea peninsula.

The world's biggest hamburger chain said Friday that the closures were "strictly a business decision which has nothing to do with politics." It cited the suspension of financial and banking services and said it is evaluating the potential business and regulatory implications of the situation.

Russia annexed Crimea last month, following a referendum held in the wake of Ukraine's political upheavals. The Kremlin backed its decision, which is not recognized by the West, by saying pro-Russian Crimeans had a right to break away from Ukraine.

Vladimir Zhirinovsky, the leader of the nationalist Liberal-Democratic Party, or LDPR, said in televised comments that he would welcome the closure of McDonald's restaurants throughout Russia.

"I will give an order to the LDPR local branches to place pickets outside all of McDonald's restaurants," Zhirinovsky said in televised remarks.

But Zhirinovsky's provocative statements are aimed mostly at his core support base of nationalist voters and do not represent official policy.

Other pro-Kremlin lawmakers quickly indicated the government has no intention of cracking down on McDonald's. Sergei Zheleznyak, a deputy speaker of the lower house and a leading member of the main Kremlin's party, the United Russia, was quoted by the Moskovsky Komsomolets newspaper as saying that there is no plan to shut down McDonald's.

The company, based in Oak Brook, Ill., has more than 400 restaurants in Russia.

The ITAR-Tass news agency quoted Igor Rudenskiy, the head of the economic affairs committee in the lower house, as saying that that closing McDonalds makes no sense. "It's a road to nowhere," he said.

The restaurants in Crimea were owned by company, not by franchisees, the company said.

"We hope to reopen our restaurants soon so we can welcome back our loyal customers," McDonald's said in its statement.